According to Abbreviationfinder, with population of 5,822,434, Wisconsin is the 20th largest state among U.S. 50 states, and WI is the two letter abbreviation for Wisconsin. Here, we provide a list of major rivers and mountains in the state of Wisconsin. 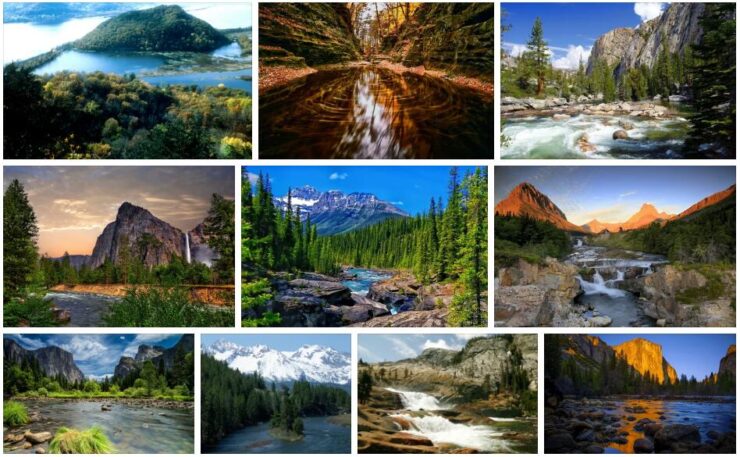 Fox River
The Fox Rover has a total length of around 320 km and is divided into two different sections that are divided by Lake Winnebago. The upper part originates in central Wisconsin. The lower part connects Lake Winnebago with Green Bay, where it flows into the town of the same name. In the south of the state, another Fox River originates in Waukesha County, the almost 300 km of which is largely in Illinois.

Milwaukee River
The Milwaukee River is approximately 120 km long and originates in the Fond du Lac County north of Milwaukee. From here it flows past the small town of Grafton into the center of Milwaukee and finally flows into Lake Michigan.

The Rock River has a total length of around 460 km and originates in the Fond du Lac County in the southeast of the state. It flows through Wisconsin and Illinois where it finally flows into the Mississippi at Rock Island. Most of the river, including the entire course within Wisconsin, is not navigable. 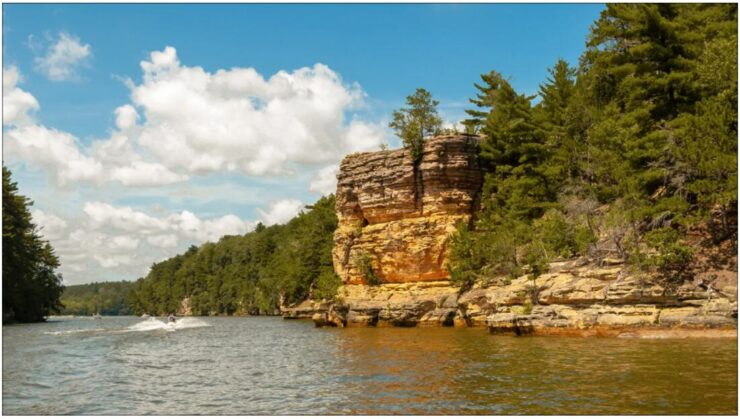 Timms Hill
Timms Hill is the highest natural elevation in the state of Wisconsin at 595 m. It is located in north central Wisconsin in Price County. A special feature is a high lookout tower on the top of the mountain, which allows a beautiful view of the surroundings.

Pearson Hill
Pearson Hill is another summit in Price County. It is 576 m high and is located west of Timms Hill in Timms Hill County Park.

Rib Mountain
Rib Mountain is a 568 m high elevation in central Wisconsin that was formed by glaciers. Despite the rather modest altitude, you get the opportunity to ski in the Granite Peak Ski Area.

Sugarbush Hill
Sugarbush Hill is located in Forrest County in northeastern Wisconsin. It has a height of 583 m. A lookout tower provides a wonderful view of the surrounding area, which is made accessible by numerous hiking trails.

Lakes and reservoirs in Wisconsin

Green Lake
Green Lake is located in Green Lake County and has a maximum depth of 72 m, which makes it the deepest lake in Wisconsin. It is around 12 km long, 5 km wide and covers an area of ​​30 km². The lake is particularly known and popular for its fishing opportunities, and some record catches in Wisconsin have been made here.

Lake Mendota
Lake Mendota borders, among other things, on the capital Madison. It is relatively shallow – maximum depth approx. 25 m – and not particularly large. Its area is approximately 39 km² with a bank length of around 35 km. The lake is known for the limnological research carried out here, for which a research center has been built on the southern shore of the lake. The lake is therefore one of the most researched bodies of water in the United States. In addition, the lake offers many leisure activities such as fishing, water skiing or windsurfing, in winter the lake is also often used for ice skating or ice hockey.

Lake Michigan
Lake Michigan is one of the five Great Lakes in North America, and is the only one that is fully united. The states of Wisconsin, Illinois, Indiana and Michigan border on its banks. Almost the entire eastern border of Wisconsin runs on Lake Michigan, so numerous state cities such as Milwaukee, Green Bay, Racine, and many more have access to the lakeshore. The lake has a maximum length of 494 km and a maximum width of 190 km. Its total area is 58,000 km². At its lowest point, it reaches a depth of 281 m.
The lake has numerous beaches along its 2,635 km of shoreline, which are particularly popular in the summer with around 12 million residents around Lake Michigan.
It is possible to get to the Atlantic Ocean or the Gulf of Mexico via the St. Lawrence River and a canal connection to the Mississippi River. For car traffic, there is also the option of crossing the water by ferry to connect Wisconsin and Michigan. The many lighthouses around the lake are also worth seeing.

Lake Superior
Lake Superior is the largest of the Great Lakes in North America and forms the northern border of Wisconsin at the small point where the Apostle Islands are located. It borders the Canadian province of Ontario and the US state of Minnesota in the north, as well as the US states of Wisconsin and Michigan in the south. A special feature is that this lake is the largest freshwater lake in the world in terms of area. Its dimensions extend over 560 km in length and over 260 km in width. Its total area is 82,100 km² and its lowest point is 406 m. Its shoreline is around 4,390 km long.

Lake Winnebago
This lake is the largest lake entirely in Wisconsin and is located in the eastern part of the state. It is also one of the largest domestic lakes in the United States, its area is 557 km² and it is approximately 46 km long and 16 km wide. Its catchment areas are the counties Winnebago, Fond du Lac and Calumet. The lake was created naturally during the ice age, but its water level rose slightly through two man-made dams. It flows over the Fox River into Lake Michigan or Green Bay. The lake has a wide range of leisure activities to offer, be it fishing trips, boat tours or even music events on the lake shore, the parks and nature on Lake Winnebago invite everyone to relax.

Apostle Islands National Lakeshore
The northernmost tip of Wisconsin extends far into Lake Superior with the Apostle Islands. The Apostelislands are 21 islands that are well worth seeing, as well as the Bayfield Peninsula, which has numerous beach sections, primeval forests and a large cluster of lighthouses. The visitor center can be found in Bayfield.

Ice Age National Scenic Trail
This hiking trail spans approximately 1930 km across Wisconsin and is managed by the National Park Service. It begins at Interstate State Park in St. Croix Falls to the west and ends at Potawatomi State Park on the headland between Green Bay and Lake Michigan to the east. There are numerous access points along the entire path to get on the way. First and foremost, the path is ideal for longer hikes, which also include overnight stays by tent in nature, but there are also excellent opportunities for bird watching, fishing or hunting.

North Country National Scenic Trail
This trail, owned by the National Park Service, runs through Wisconsin through seven other states in the northern United States. It begins in the east of New York State and ends in North Dakota. The trail has a total length of approximately 7400 km and is the longest hiking trail in the USA. It offers a variety of scenic impressions and is definitely a challenge for every long-distance hiker.

Saint Croix National Scenic Riverway
Under the auspices of the National Park Service, around 400 km of river landscapes on the St. Croix River and the Namekagon River in northwestern Wisconsin are protected. It runs through picturesque unspoilt nature and also offers numerous leisure activities such as camping, fishing, hunting and canoeing.

The North Country Trail was inaugurated in 1980 and to date around 3,400 have been certified as a paved and managed hiking trail. The North Country Trail runs from the small town of Crown Point in northeastern New York to Lake Sakakawea State Park in central North Dakota. On this course, the North Country Trail passes a total of 7 states. From east to west, these are: New York, Pennsylvania, Ohio, Michigan, Wisconsin, Minnesota and North Dakota. When the trail begins in northeastern New York, it initially runs westward, then crosses northwest Pennsylvania. In Ohio, he joins the Buckeye Trail and makes a circular motion that swings him north-west in Ohio. In Michigan, the trail also runs from south to north until after crossing the “Straits of Mackinac” (Mackinac Strait, connects Michigan and Lake Huron) it turns west again, along the southern coast of Lake Superior (Upper Lake) respectively. After crossing Northern Wisconsin, the North Country Trail divides into two sections. One runs north along the coast of Lake Superior and represents a huge “detour”.

The other part basically continues in a westerly direction and both reunite northeast of Minnesota. Finally, the trail runs through North Dakota where it ends in the central part of the state. On this trip, 10 National Forests (Finger Lakes, Allegheny, Wayne, Manistee, Hiawatha, Ottawa, Chequamegon, Superior, Chippewa and Sheyenne National Grassland) are hiked. Other highlights include the Pictured Rocks National Lakeshore, Wisconsin’s St. Croix National Scenic Riverway, New York’s Fort Stanwix National Monument and Dayton Aviation Heritage National Historical Park, Tamarac Wildlife Refugee, Audubon Wildlife Refugee. In total, the North Country Trail runs through 57 state parks and 47 state forests. So the trail should offer something for everyone who has enough time.