According to Abbreviationfinder, with population of 5,148,714, South Carolina is the 23rd largest state among U.S. 50 states, and SC is the two letter abbreviation for South Carolina. Here, we provide a list of major rivers and mountains in the state of South Carolina. 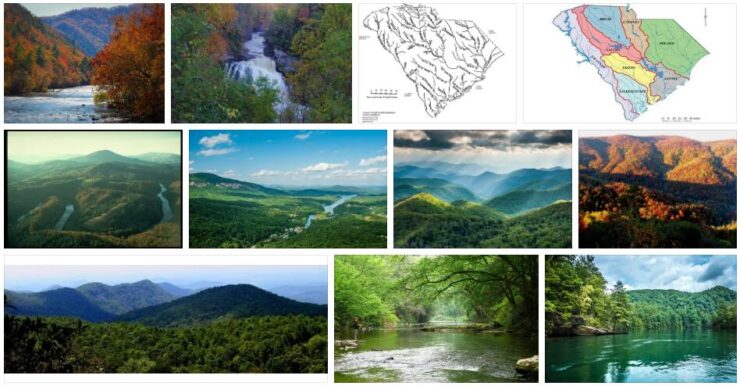 Savannah River
The Savannah River is located directly between the two states of Georgia and South Carolina, whose main border he also forms. The Savannah River is approximately 484 km long. It rises in Lake Hartwell, where the Seneca and Tugaloo rivers flow, and takes its course towards the Atlantic Ocean. Furthermore, due to numerous height differences in the river system, the river is stowed twice at Richard B. Russel and J. Strom Thurmond Dam. The river flows through the two large cities of Savannah and Augusta, to whose economic development it contributed a large part in the 18th century. An Atlantic seaport near Savannah has existed since 1773 and today contributes most of the pollution of the entire river. The Savannah River is one of the most polluted rivers in the United States. The navigability of the Savannah River ends at Augusta,

Santee River
The Santee River is an approximately 230 km long river in the state of South Carolina. The Santee River is about 40 km southeast of Columbia through the confluence of the Wateree and Congaree River. The upper course of the river is dammed up to Lake Marion. from there the Santee River runs in a south-easterly direction to its mouth in the Atlantic. 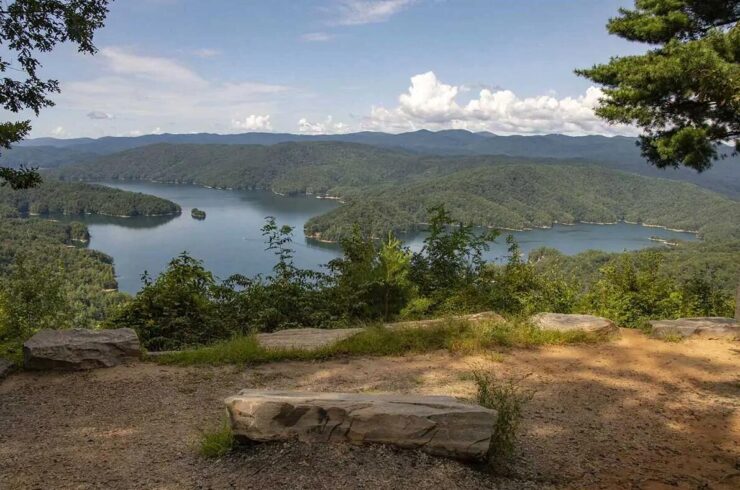 The state of South Carolina rises to the northwest and the northwest part of the state lies in the Appalachian Mountains, more precisely in the Blue Ridge Mountains. The country’s highest mountain, the Sassafras Mountain, is also located here. This hilly region is home to Caesars Head State Park and Table Rock State Park, home to the state’s second highest mountain, Pinnacle Mountain (1,041 m).

Lakes and Reservoirs in South Carolina

Hartwell Lake
Lake Hartwell is a reservoir in Georgia and South Carolina, where the Tugaloo River and Seneca River flow and which flows over the Savannah River. It is a popular place for anglers, water sports enthusiasts and animal lovers, because Lake Hartwell is known for the distinctive flora and fauna that surrounds it. Its total bank length is approximately 1,600 km and it covers an area of ​​approximately 230 km². The average depth of the lake is about 14 m, at its deepest it measures 56 m. Not far from the two tributaries of the Savannah River is the Hartwell Dam. The construction of the dam ended in 1962. It was built by the US Army for the purpose of energy generation, navigation and of course flood protection, since B. Clemson University are below reservoir level.

Strom Thurmond Reservoir
The J. Strom Thurmond Lake, also known as Clarks Hill Lake, is a reservoir between Georgia and South Carolina, which is located in the Savannah River Basin. It was built in 1952 with the construction of the J. Strom Thurmond Dam and is the second largest man-made lake east of the Mississippi River after Kentucky Lake. Its size is 288 km². The J. Strom Thurmond Reservoir is one of the most popular recreational areas in the southern United States. The lake is known for its fine water quality, from which not only humans but also a number of animal species benefit. Every year millions of people flock to the area and relax in the numerous parks and campsites. The J. Strom Thurmond dam is not far from the city of Augusta, which was first put into operation in 1954. He operates a 7-turbine waterworks that generates around 700,000,000 KWh annually.

Lake Marion
The Lake Marion reservoir is the largest lake in the state of South Carolina with an area of ​​approximately 450 km². Lake Marion is located in the southern part of the state and has a shoreline of 507 km in length. The Santee River has been dammed here by the Santee Dam since 1941. The dam was created as a project during the Great Depression. The lake is home to Santee State Park and the Santee National Wildlife Refuge. Furthermore, like many boat ramps ensure easy access and make Lake Marion a very popular fishing area. The largest largemouth bass in South Carolina was caught in Lake Marion.

Lake Murray
The Lake Murray has an area of ​​approximately 200 km² and is located in the interior of the city of Columbia. The Saluda River has been dammed here by the Saluda Dam since the late 1920s. At the time of the completion of the Saluda Dam, Lake Murray was the largest reservoir in the world. The Dreher Island State Recreation Area is located on the western shore of the lake.