According to Abbreviationfinder, with population of 3,956,971, Oklahoma is the 28th largest state among U.S. 50 states, and OK is the two letter abbreviation for Oklahoma. Here, we provide a list of major rivers and mountains in the state of Oklahoma. 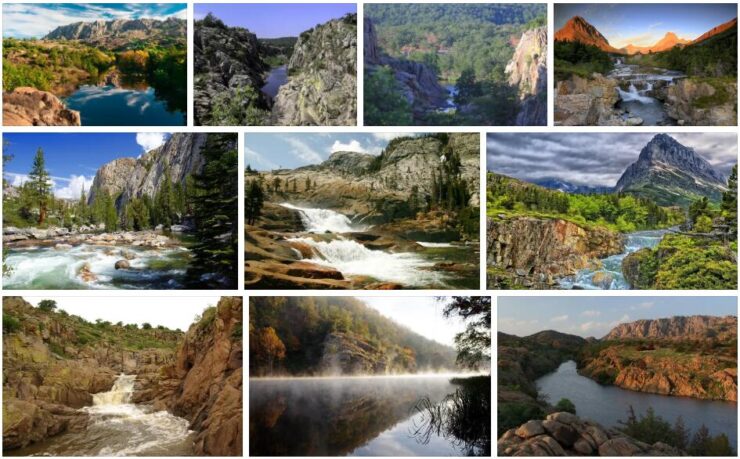 Red River
The Red River is an approx. 1,966 km long tributary of the Mississippi and flows in northern Texas and southern Oklahoma as well as in the extreme southwest of Arkansas and in the north of Louisiana. The Red River forms part of the border between the states of Oklahoma and Texas. The river is created by the confluence of the Prairie Dog Town Fork, Elm, Salt and North Fork in northern Texas. Because of the red mineral rock in the headwaters, the river got the name Red River. In the past, the Red River was also the border between the United States and the Viceroyalty of New Spain. The Red River estuary is divided into two parts. Two arms form about 110 km northeast of the city of Baton Rouge in Louisiana, the western part of which flows into the Atchafalaya River and the eastern part into the Mississippi. In Louisiana, the Red River intersects the northern part of Louisiana diagonally from northwest to southeast.

Ouachita Mountains
The Ouachita Mountains, or simply Ouachitas, are a mountain range that is located in the southeastern part of Oklahoma and in the western part of Arkansas are located. The Ouachita Mountains are a very old fold mountain range that originated around 300 million years ago. At the time the Ouachita Mountains were formed, they were roughly the height of today’s Rocky Mountains, but were eroded a long time ago due to their great age and are therefore more of a chain of hills in direct comparison. Their highest peak is Mount Magazine with a height of approx 839 m, which is also the highest elevation in the US state of Arkansas. Unlike most mountain ranges in the United States, the Ouachita Mountains run east-west instead of north-south. The Ouachita National Forest (Arkansas and Oklahoma), Hot Springs National Park (Arkansas) and many other state parks are located in the Ouachita Mountains. The Ouachita National Recreation Trail (Arkansas and Oklahoma) also runs here. This approx. 360 km long hiking trail leads through the mountain landscape and connects the Pinnacle Mountain State Park in Arkansas with the Talimena State Park in Oklahoma. For those who do not want to hike, the National Scenic Byway (comparable to the German concept of vacation or panorama roads) “Talimena Scenic Drive” offers itself, which is about 87 km long from Talihina in southeastern Oklahoma via Oklahoma State Highway 1 and Arkansas Highway 88 to Mena in southwest Arkansas.

Ozark Mountains
The Ozark Mountains, or simply Ozarks, are a highland region that covers almost half of the state of Missouri. Other states in which parts of the Ozarks are located are Arkansas, Oklahoma and Kansas. The heart of the Ozarks are the Saint Francois Mountains. The Ozarks form a huge plateau around them. With 122,000 km², the Ozarks are by far the largest mountain region between the Appalachian Mountains and the Rocky Mountains. However, the highest point in the region is only 540 meters above sea level. The Ouachita Mountains in Arkansas are often still included in the region. Ozark Mountains and Ouachita Mountains are correctly referred to as the US Interior Highlands. It is the only major mountainous area between the Appalachian Mountains in the eastern United States and the Rocky Mountains in the western United States.

Lakes and reservoirs in Oklahoma

With over 200 man-made reservoirs, Oklahoma has more reservoirs than any other U.S. state.

Broken Bow Lake
The Broken Bow Lake is located in southeast Oklahoma, near the city of Broken Bow. The reservoir, which is one of the largest lakes in Oklahoma with an area of ​​approx. 57 km², extends to a large extent in the Ouachita Mountains. This area is covered with dense forest and is therefore a true paradise for nature lovers. The Mountain Fork River has been dammed here since 1968. The construction of the dam lasted from 1961 to 1968. There are many hiking trails around the lake, of which the Big Oak Nature Trail and the Beaver Lodge Nature Trail are particularly recommended. There are also two state parks, the Beavers Bend Resort Park and the Hochatown State Park.

Eufaula Lake
The Eufaula Lake is located in the east of the state of Oklahoma, approx. 85 km southeast of the city of Tulsa. Eufaula Lake covers an area of ​​approximately 425 km² and is the largest lake in Oklahoma in terms of area. The Canadian River has been dammed here by the Eufaula Dam since 1964. The Eufaula dam was built from 1956 to 1964 and primarily serves to generate energy. The Eufaula is a popular local recreation area, especially for anglers and friends of boating. There are two state parks on the shores of the lake, Eufaula Lake State Park and Arrowhead State Park.

Lake Texoma
Lake Texoma is a 103 km² reservoir in northeast Texas or south Oklahoma, it runs on the border between the two states. The Red River has been dammed here by the Denison Dam since 1944. Because of its size and proximity to the Dallas-Fort Worth metropolitan area, the area around the lake is a very popular local recreation area. There are 2 nature reserves, 2 state parks, 12 marinas and numerous resort facilities and campsites.