According to Abbreviationfinder, with population of 10,488,084, North Carolina is the 9th largest state among U.S. 50 states, and NC is the two letter abbreviation for North Carolina. Here, we provide a list of major rivers and mountains in the state of North Carolina. 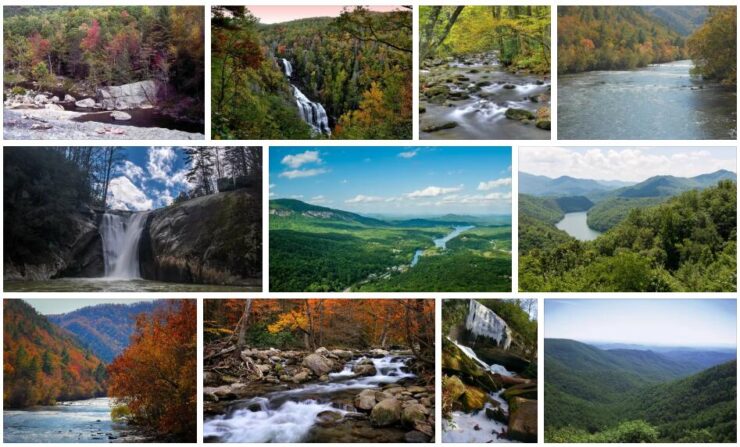 Roanoke River
With a length of almost 660 km, the Roanoke River is one of the largest rivers in the USA. It runs between Virginia in the south and North Carolina in the northeast. The river is created by the confluence of its two source rivers – the North and South Fork Roanoke River – in the Blue Ridge Mountains and extends across the eastern part of the Appalachian Mountains, the Piedmont Plateau and along the Atlantic coast to Albemarle Sound, an estuary in North Carolina, where it finally flows.

Yadkin River
The approximately 700 km long Yadkin River flows through the states of North and South Carolina and is one of the longest rivers in these states. The Yadkin River rises in the northwestern part of North Carolina near the Thunder Hill Overlook. From the South Carolina state border, the river is called the Pee Dee River.

Cape Fear River
The Cape Fear River is an approximately 325 km long black water river in the east of North Carolina. It gets its name from its mouth at Cape Fear in the Atlantic. The river is created by the confluence of the Deep River and Haw River.

Lakes and reservoirs in North Carolina

Lake Chatuge
The beautiful Lake Chatuge with 212 km of bank length is located between Hiawassee, Georgia and Heyesville, North Carolina. The lake, known for its clarity, is the ideal place for swimming, fishing, boating or camping. It is located in part in the Nanthala National Forest in North Carolina and is said to be one of the most picturesque lakes in the Tennessee Valley Authority water system, which includes the Hiawassee Dam, the Apalachia Dam and the Chatuge Dam. All three dams were built in 1940 for flood protection, but Chatuge is also known today as a small power generator for the area. The dam is approx. 44 m high, 870 m long and has a capacity of approx. 10,000 kilowatts.

John H. Kerr Reservoir
The John H. Kerr Reservoir is a nearly 200 km² reservoir on the Roanake River between Virginia and North Carolina, the name of which goes back to a former congressman from North Carolina. Its construction around 1950 served to protect against flooding and generate electricity. The lake has a total storage space of around 1,900,000,000 m³ and a catchment area of ​​more than 20,000 km² and is the largest body of water in Virginia. The John H. Kerr Reservoir stretches over six counties, making it accessible to almost everyone and a popular excursion destination. The dam is located in Mecklenburg County near Buggs Island.