According to Abbreviationfinder, with population of 19,453,561, New York is the 4th largest state among U.S. 50 states, and NY is the two letter abbreviation for New York. Here, we provide a list of major rivers and mountains in the state of New York. 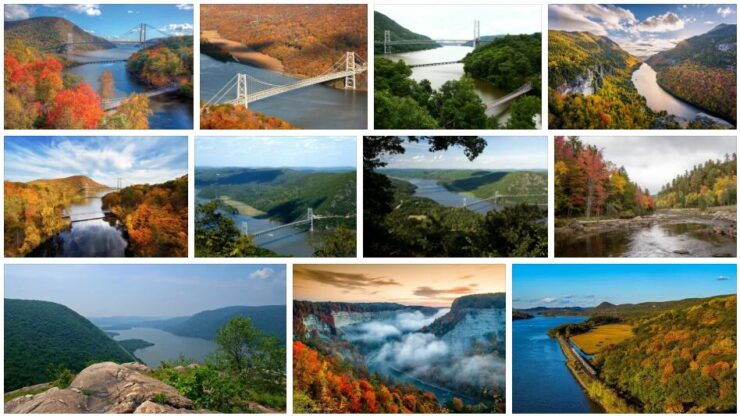 Rivers in the state of New York

East River
Despite its name, the East River is not a natural river, but an elongated strait that separates Long Island from Manhattan and the mainland. At the same time, it creates a connection between Long Island Sound and the mouth of the Hudson River. East and Hudson River meet in New York Bay.

Hudson River
The Hudson River is 493 km long and is one of the most famous rivers in the state of New York. This is because the Hudson River borders Manhattan Island in New York City to the west and then flows into Upper New York Bay. The river springs from Henderson Lake in the Adirondack Mountains. From there it basically runs in a southern direction. The Hudson River was named after Henry Hudson. This English seafarer explored the river for the Dutch in 1609. The Hudson River is navigable upstream to Albany. On January 15, 2009, pilot Chesley Burnett Sullenberger landed a spectacular ditch on the Hudson River.

Mohawk River
The Mohawk River is an approximately 240 km long river in the northeast of the state of New York. The Mohawk River is formed north of the city of Rome by the confluence of its two source streams, the East Branch and the West Branch Mohawk River. On the route between Rome and Lake Erie, a navigable connection was created with the Erie Canal. The river flows into the Hudson River near the capital, Albany.

Niagara River
With a length of only 56 km, the Niagara River is a relatively short North American river, but still an important one. The entire Niagara River forms the border between the province of Ontario in Canada and the US state of New York. It also represents the connection between Lake Erie and Lake Ontario. Over a short distance of 56 km, it overcomes a height difference of 99 m. How does he do it? The Niagara River, as its name suggests, falls over the Niagara Falls.

Saint Lawrence River (Saint Lawrence River)
The Saint Lawrence River is a major North American river. It flows through the Canadian provinces of Ontario and Québec and forms the border between Ontario and the US state of New York in its upper reaches. One can argue about the length of the river: depending on where and how to start and end the river, it is between 568 and an impressive 2,900 kilometers long. It is the third largest river in North America. The catchment area of ​​the river basically includes the Great Lakes area. The wildlife of the river and its marine estuary is impressive, but there are many species of whales here, such as blue whales, fin whales and white whales.

Lakes in the state of New York 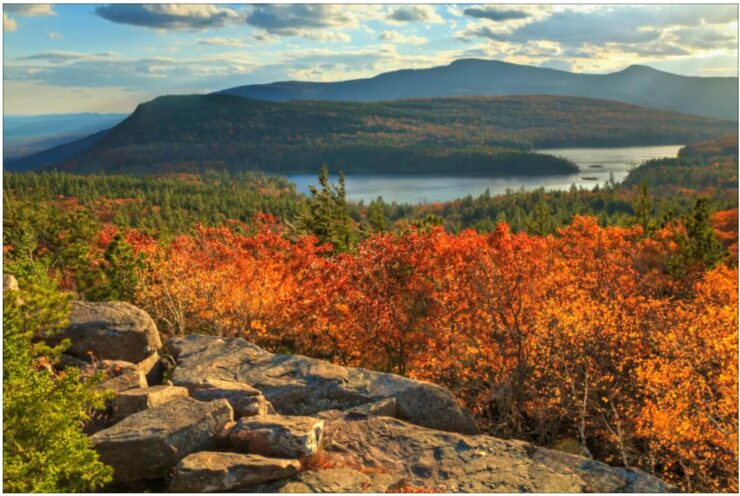 Lake Erie (Lake Erie)
With an area of ​​approximately 25,745 km², Lake Erie is the fourth largest of the large lakes. It is the southernmost of the Great Lakes and represents the border between Canada in the north and the USA in the south. The maximum depth of Lake Erie is 64 m. The inlet into Lake Erie is through the Detroit River from Lake Huron and its outlet is the Niagara River, which forms the Niagara Falls, into Lake Ontario. The lake is named after the Indian tribe of the Erie who lived on its banks. The area around the lake is a popular wine-growing area. The states of Pennsylvania, Ohio, New York and Michigan are located on the American side of the lake in the West. In winter there is so-called lake effect snow, which makes the surrounding area the snowiest in the USA. The lake is very popular with visitors because it offers numerous activities. The numerous shipwrecks offer excellent diving opportunities and the many parks and islands also invite you to switch off.

Lake Champlain
Lake Champlain is the sixth largest inland lake in the USA, which runs between the states of Vermont and New York and to the north of the Canadian province of Québec adjacent. It is approx. 180 km long, approx. 20 km wide and flows over the Richelieu River. About 80 islands are located in Lake Champlain, including Grand Isle, an independent county in the state of Vermont. Lake Champlain was named after Samuel de Champlain, who discovered the lake in 1609 and shortly after its discovery reported a 1.5 m sea monster and triggered real hype. To this day, the relatives of Nessie – called Champ – have received great attention. Tours are offered daily to track down the monster and Champ is also the mascot for the minor baseball league in the state.

Finger Lakes
The term Finger Lakes describes a number of lakes in northeastern New York. The name comes from the shape of the lakes, all of which have an elongated shape and are located south of Lake Ontario and can be interpreted on maps as their fingers. However, there are eleven lakes and therefore eleven fingers. These are from east to west:

The area around the Finger Lakes is particularly known for its wine growing. This has been happening here since 1839. Both white and red wine are grown. The wine region is the largest in the state of New York and the second largest in the entire United States, after the Napa Valley in California.