According to Abbreviationfinder, with population of 2,096,829, New Mexico is the 37th largest state among U.S. 50 states, and NM is the two letter abbreviation for New Mexico. Here, we provide a list of major rivers and mountains in the state of New Mexico. 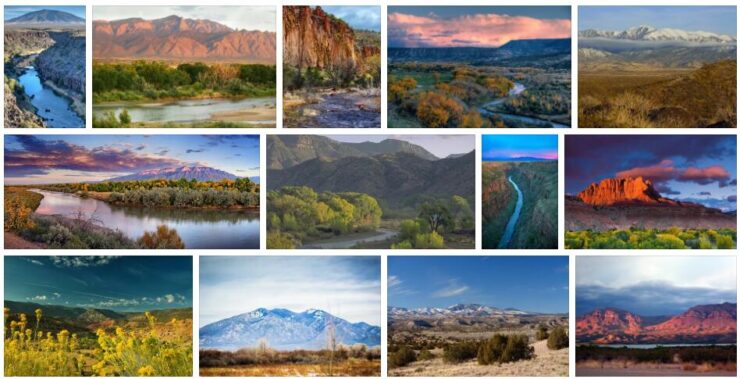 Rio Grande
The Rio Grande is a 3000 km long stream that rises in Colorado in the Rocky Mountains, flows through New Mexico and finally flows into the Gulf of Mexico in Mexico. In Mexico it bears the name Rio Bravo. Depending on the measurements, the Rio Grande is the fourth or fifth largest river in North America. For a short distance, the Rio Grande forms the border between Texas and New Mexico.

Pecos River
The Pecos River rises near Santa Fe and flows towards Texas, where it flows into the Rio Grande. In New Mexico, the river is dammed by several dams. The Santa Rosa Lake near Albuquerque is the first reservoir of the Pecos. There are also two dams north of Carlsbad, which are to help irrigate the country as part of the Carlsbad Reclamation Project. The region west of the Pecos River was known as the “Wild West” in the second half of the 19th century.

Gila River
The Gila River originates in Sierra County in New Mexico and flows largely through Arizona where it flows into Yuma in the Colorado. between 1848 and 1853, the course of the river was considered the border between the United States and Mexico. Overall, the Gila River is just over 1000 km long. In New Mexico it flows through the Gila National Forrest and the Gila Cliff Dwellings National Monument before crossing the Arizona border.

San Juan River
The San Juan River is a tributary of the Colorado that flows through the states of Utah, New Mexico and Colorado. It is 644 km long and flows into Lake Powell. He is particularly known for his fishing grounds near the city of Aztec in New Mexico. It is one of the most productive trout grounds in the United States. 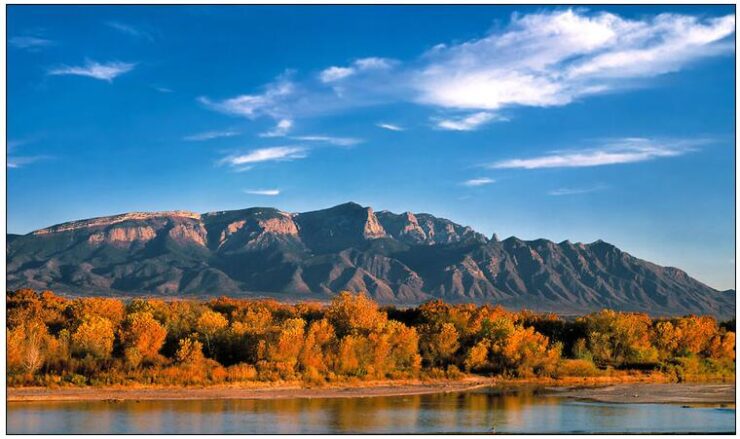 Wheeler Peak
The Wheeler Peak in the Rocky Mountains, north of the city of Taos, is the highest peak in the US state of New Mexico at 4011 meters. It is named after George Montague Wheeler, a naturalist who led a ten-year research project in seven states in the southwestern United States. Mount Walter, New Mexico’s second highest mountain, is located directly north of Wheeler Peak. The Taos Ski Valley is also in the immediate vicinity.

Mount Taylor
Mount Taylor is a stratovolcano in northwestern New Mexico, near the city of Grants. It is the highest point in the San Mateo Mountains and the Cibola National Forest. The volcano was active in the Pliocene 3.3 to 1.5 million years ago. For the Navajo people it is considered one of the four sacred mountains. In the 1980s there was massive mining and mining of uranium at Mount Taylor. Since 2009, however, it has been on the list of America’s most vulnerable places at the request of the area’s indigenous people.

Shiprock
The Shiprock is a mountain formation in San Juan County in New Mexico. The rocks are 482 meters high and rise from the desert-like plateau of the Navajo volcanic field. The nearest town is Farmington. The rock massif is of great spiritual importance to the Navajo people. According to the story, the Shiprock was once a monolith on which the people lived until a lightning strike gave the mountain its current bizarre and angular shape and made it uninhabitable. It has not been allowed to climb the mountain since 1970.

South Baldy
The South Baldy is the highest peak in the Magdalena Mountains in central New Mexico. It is 1162 meters high and can be easily reached from the dirt road to Langmuir or climbed from below. The summit is the annual venue for a mountain bike ascent race as part of the Tour of Socorro.

Lakes and reservoirs in New Mexico

Abiquiu Reservoir
Abiquiu Lake is a reservoir in northern New Mexico. It is fed by the Rio Chama and delimited by the Abiquiu dam. This dam is made of earth and is 550 m long and 104 m high. The shores of the lake are ideal for leisure activities such as camping, fishing, hiking and swimming.

Caballo Reservoir
The Caballo Reservoir is a reservoir that feeds on the Rio Grande. It is the fourth largest reservoir in New Mexico with an area of ​​over 4,500 hectares. It is used for leisure activities such as boat trips, swimming, water skiing and fishing. You can also see rare bird species here. The area in which the lake is located is Caballo Lake State Park.

Conchas Lake
Conchas Lake is a 40 km long reservoir in northeastern New Mexico. It is fed by the Canadian River and dammed up by the Conchas Dam. The lake includes the Conchas Lake State Park, where you can rent boats for the lake. The lake contains a variety of different types of fish such as American pikeperch, bigmouth bass and catfish.

Navajo Reservoir
Navajo Lake is a reservoir in northwestern New Mexico. A smaller part of the lake is in Colorado. It feeds on the San Juan River and serves to balance the water depth of the river. The dam that separates the river and lake is the 1200 m long Navajo Dam. Two banks of the lake are part of the Navajo Lake State Park, which maintains over 200 campsites and BBQ areas and offers a variety of leisure activities.

Red Bluff Reservoir
The Red Bluff Reservoir is a reservoir on the Pecos River, around 60 km north of the city of Pecos in Texas. The northern coast of the lake is the geographic lowest point in the state of New Mexico. The dam and the lake were built or filled in 1936. Many different types of fish were released in the lake to enable fishing.

Zuni Salt Lake
The Zuni Salt Lake is a high desert lake and a classic volcanic maar. It is an extremely shallow lake with a depth that is only 1.2 meters in the wet season. Nevertheless, the area of ​​the lake is almost 2 km². Much of the water evaporates in hot weather. For centuries, various Pueblo peoples such as the eponymous Zumi, Acoma and Taos made pilgrimages to the Zuni Salt Lake to mine salt. In the Zuni it is considered a sacred lake.