According to Abbreviationfinder, with population of 6,137,428, Missouri is the 18th largest state among U.S. 50 states, and MO is the two letter abbreviation for Missouri. Here, we provide a list of major rivers and mountains in the state of Missouri. 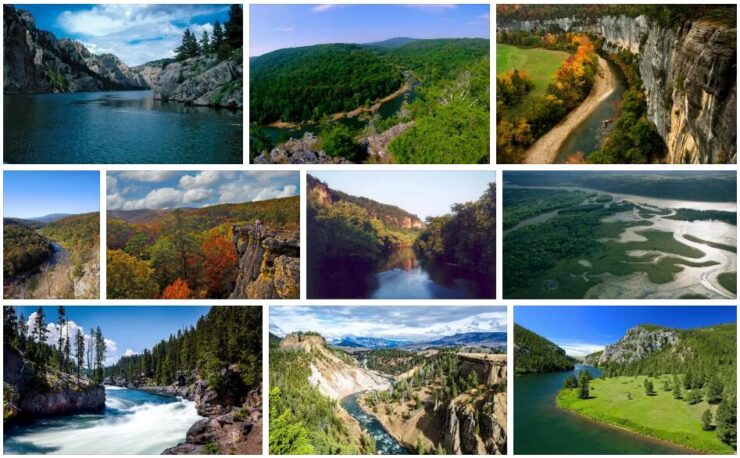 White river
The White River is 1,162 km long and flows through the states of Arkansas and Missouri. It rises in the Boston Mountains in northwest Arkansas and flows to Missouri, where it forms Lake Taneycomo near the city of Branson, a reservoir that is held by the dam at Powersite. The river then loops back to Arkansas, where it flows into the Mississippi to the southeast.

St. Francis River
The 686 km long St. Francis River flows through the states of Missouri and Arkansas. It rises in a granite rock region in southeast Missouri and flows steadily south through the Ozarks and the St. Francoir Mountains near Missouri’s highest point, the Taum Sauk. The St. Francis River also forms part of the border between Missouri and Arkansas until it crosses it at Missouri’s lowest point to Arkansas, where it finally flows into the Mississippi. In Missouri, it flows through the Mark Twain National Forrest, the Sam A. Baker State Park and the cities of Farmington, Greenville and Fisk. The Missouri white water competitions have been held there since 1967. The main disciplines of this competition are white water slalom and white water races.

Osage River
The 444 km long Osage River is one of the longest rivers in Missouri. It is a tributary of the Missouri that rises in southwestern Missouri. It first flows in an easterly direction, but then changes direction in a northeast direction. Here the course of the river meanders strongly and has been partially converted into a large lake landscape. The two lakes that emerged are the Harry S. Truman Reservoir and the Lake of Ozarks. These two reservoirs are a popular destination for tourists.

Gasconade River
The Gasconade River is 450 km long and is located in central Missouri. it rises in the Ozarks southeast of Hartville and flows through seven counties in Missouri until it flows into the city of Gasconade in the Missouri. The river also flows a short distance through the Mark Twain National Forrest. The river is popular for kayaking or canoeing. There are also caves to visit and various wild animals to be seen on the shore. The Gasconade River is particularly known to anglers for its large stocks of trout and black bass.

Ozarks
The Ozarks or Ozark Mountains are a highland region that covers almost half of the state of Missouri. Other states in which parts of the Ozarks are located are Arkansas, Oklahoma and Kansas. The heart of the Ozarks are the Saint Francois Mountains. The Ozarks form a huge plateau around them. With 122,000 km², the Ozarks are by far the largest mountain region between the Appalachian Mountains and the Rocky Mountains. However, the highest point in the region is only 540 meters above sea level. The Ouachita Mountains in Arkansas are often still included in the region. 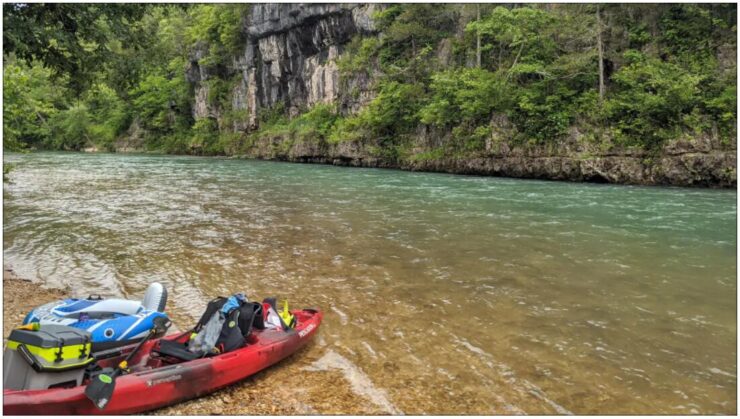 Lakes and Reservoirs in Missouri

Lake of the Ozarks
The Lake of the Ozarks is a large reservoir that was created by merging the meandering Osage River and three of its tributaries. It has a serpentine shape and its water surface is 223 km². Because of its shape, it is also known as the Magic Dragon. During its construction phase from 1912 to its completion in 1931, it was the largest man-made lake in the United States and one of the largest in the world. Most of the lake and shoreline is privately owned and the area is best known for its many golf courses.

Big Lake
The Big Lake is the largest old water lake in Missouri with an area of ​​2.6 km² and thus also the largest natural lake in the state. It is a dead Missouri river arm near the town of Big Lake. On the north shore of the lake is Big Lake State Park, founded in 1932, which also includes the largest marshland in Missouri. The lake is known to be very shallow. On average, its depth is about 1.5 meters. It is only up to nine meters deep at one point. It is said that if you are careful, you can walk through the lake.

Bull shoals lake
The Bull Shoals Lake in the Ozark Mountains is a reservoir with numerous arm-like bulges that make it a paradise for leisure activities such as boating, water sports, swimming and fishing. It is separated from the Wite River by the Bull Shoals Dam, one of the largest dams in the United States. The construction of the dam was completed in 1951. The Bull Shoals White River State Park extends above and below the dam.

Truman Reservoir
The Truman Reservoir, also known as Truman Lake, is the largest reservoir in Missouri with an area of ​​225 km². Like the Lake of the Ozarks, it lies on the Osage River. Construction of the dam began in 1964 with the name Kaysinger Bluff Dam and Reservoir and in 1970 it was renamed Harry S. Truman Dam and Reservoir.