According to Abbreviationfinder, with population of 9,986,857, Michigan is the 10th largest state among U.S. 50 states, and MI is the two letter abbreviation for Michigan. Here, we provide a list of major rivers and mountains in the state of Michigan. 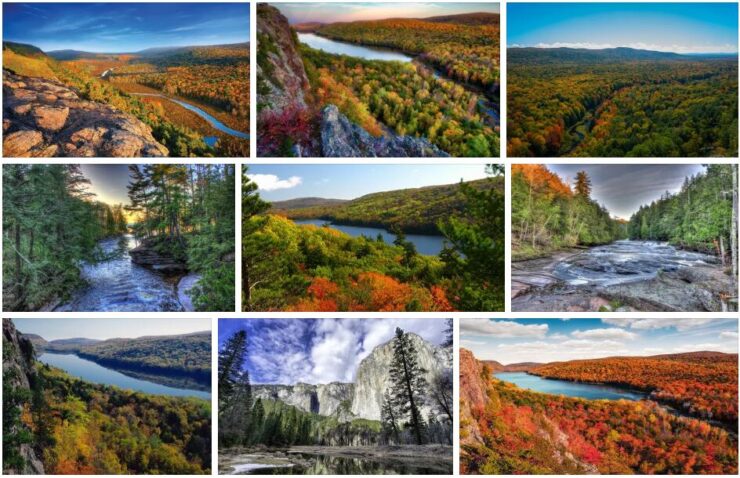 Grand River
At 420 km, the Grand River is the longest river in Michigan. It originates in Hilsdale County and flows into Lake Michigan at Grand Haven – there is a total of 213 m height difference between the source and the mouth. It is inhabited by trout and salmon on most of its course. It belongs to the river system of the St. Lawrence River.

Huron River
The Huron River in southeast Michigan is approximately 220 km long and one of the larger rivers in Michigan. It originates in Oakland County and flows into Lake Erie – there are numerous parks and wildlife reserves along its course, which makes its surroundings a popular recreation area. Due to its slow flow speed, the Huron River is particularly popular with canoeists.

Detroit River
The Detroit River is located in the major cities of Detroit and Windsor (Ontario) and forms the international border between the USA and Canada. It is about 51 km long and 4 km wide and belongs to the river system of the great lakes. Detroit is an important source of water for around 5 million people, whom it supplies with drinking water. It is also one of the most busy waterways in the world. Due to the strong industry that surrounds it, numerous environmentalists have worked to preserve nature in the area around the Detroit River. B. 1961 created the Detroit River Wildlife Refugee. It is the only international wildlife sanctuary in the United States and Canada that belongs to both countries.

St. Mary’s River
The approximately 120 km long St. Mary’s River forms the entire border between Michigan and Ontario (Canada). It originates in Whitefish Bay in Lake Superior, ends in the North Channel in Lake Huron and belongs to the river system of the St. Lawrence River. Of the myriad of smaller islands, St. Joseph Island is located on the St. Mary’s River. It belongs to the province of Ontario and is a popular destination in the region.

St. Clair River
The St. Clair River is a 64 m long river that lies between Michigan and Ontario and connects the upper and lower Great Lakes. It also belongs to the St. Lawrence River system and is part of the 3,776 km long sea route. It rises in Lake Huron and ends in Lake St. Clair, which is part of the Great Lakes System. The river is an important function for the local economy.

Huron Mountains
The Huron Mountains are the largest mountain range in Michigan. They are located in the counties of Baraga and Marquette and overlook Lake Superior. Its highest point is Mount Arvon. At just under 603 m, it is the largest mountain in Michigan. Up to six meters of snow fall here every year, which makes the area particularly popular with winter sports enthusiasts.

Porcupine Mountains
Near the Lake Superior are the rather small but fine Porcupine Mountains, also called Porkies. They are located in the Counties Ontonagon and Gogebic and include the Porcupine Mountains Wilderness State Park. This was founded in 1945 and covers a large area of ​​maple trees. This mountain range is particularly good for hiking, mountain biking and skiing over 140 km. The park is the largest pristine area in Michigan.

Lakes and Reservoirs in Michigan

Lake Superior
With a surface area of ​​82,103 km², Lake Superior (German: Oberer See) is the largest of the five Great Lakes in North America and the second largest inland water after the Caspian Sea. It is approx. 600 km long, 283 km wide and around 400 m deep at its deepest point. It forms the border from the USA to Canada and is located in Michigan and Wisconsin. With relatively few industrial facilities on its shores, Lake Superior is the lake with the best water quality in Michigan.

Lake Huron
With a surface area of ​​almost 60,000 km², Lake Huron (German: Huron) is the second largest lake in the five Great Lakes in North America. It is approx. 332 km long, 245 km wide and 230 m deep at its deepest point. It also forms a border from the USA to Canada and delimits Michigan and the province of Ontario from each other. Almost a third of these are in the United States. Mackinac Road connects Lake Huron to Lake Michigan – sometimes they are even referred to as a lake because the connection is a non-sloping body of water. On the Canadian side of the lake is Manitoulin, the world’s largest inland island.

Lake Michigan
Lake Michigan (German: Michigansee) is the only one of the five Great Lakes in North America located entirely in the United States and borders on the states of Michigan, Indiana, Illinois and Wisconsin. It has an area of ​​57,800 km², is 494 km long, 190 km wide and measures 281 m at its deepest point. After Lake Superior and Lake Huron, Lake Michigan is the third largest lake in the five Great Lakes in North America. With its countless beaches, the lake is often referred to as the third coast of the United States. Unfortunately, its quality in the south is only satisfactory, as numerous industrial plants have settled there over time. 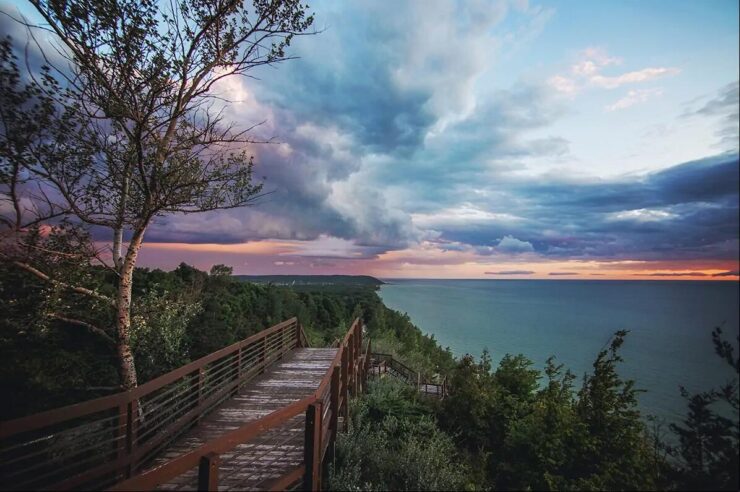 Lake Erie (Lake Erie)
With an area of ​​approximately 25,745 km², Lake Erie is the fourth largest of the large lakes. It is the southernmost of the Great Lakes and represents the border between Canada in the north and the USA in the south. The maximum depth of Lake Erie is 64 m. The inlet into Lake Erie is through the Detroit River from Lake Huron and its outlet is the Niagara River, which forms the Niagara Falls, into Lake Ontario. The lake is named after the Indian tribe of the Erie who lived on its banks. The area around the lake is a popular wine-growing area. The states of Pennsylvania, Ohio and New York are located on the American side of the lakeand Michigan in the west. In winter there is so-called lake effect snow, which makes the surrounding area the snowiest in the USA. The lake is very popular with visitors because it offers numerous activities. The numerous shipwrecks offer excellent diving opportunities and the many parks and islands also invite you to switch off.