According to Abbreviationfinder, with population of 3,017,825, Arkansas is the 34th largest state among U.S. 50 states, and AR is the two letter abbreviation for Arkansas. Here, we provide a list of major rivers and mountains in the state of Arkansas. 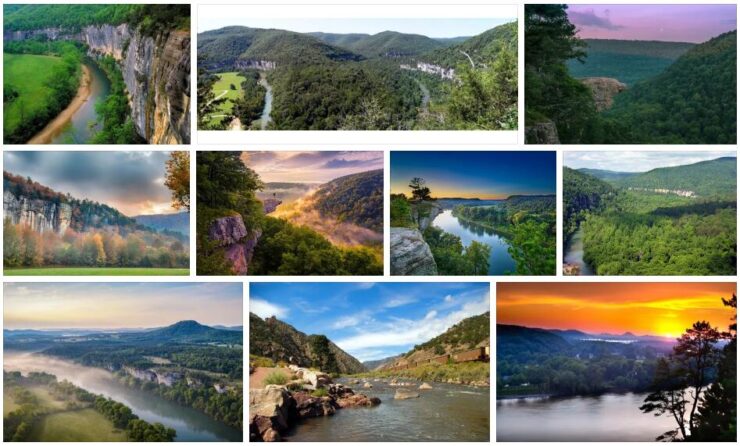 The source of the river is located in central Colorado, about 130 km southwest of the city of Denver, in the Sawatch Range, which belongs to the Rocky Mountains, at an altitude of about 4,260 m. On its way through the Rocky Mountains, the Arkansas River flows through a primarily rocky river bed and also develops into a thundering river due to the steep gradient. The Arkansas River flows through many deep gorges in this region.

So also the gorge Royal Gorge. Here you will find the Royal Gorge Bridge, which with a height of approx. 321 m is one of the highest suspension bridges in the world. From there it flows east through the Great Plains region. He passes the big cities of this region like Pueblo, Wichita, Tulsa and Little Rock. In the state of Kansas, the course of the Arkansas River is getting quieter. The “lower” course of the Arkansas is navigable for a length of approx. 1,046 km to the city of Tulsa and via its tributary, the Verdigris River, one can reach the most inland port of the USA in Catoosa from the coast. The Arkansas River flows into the Mississippi in southeast Arkansas near the small town of Dumas.

Red River
The Red River is an approx. 1,966 km long tributary of the Mississippi and flows in northern Texas and southern Oklahoma as well as in the far southwest of Arkansas and in the north of Louisiana. The Red River forms part of the border between the states of Oklahoma and Texas. The river is created by the confluence of the Prairie Dog Town Fork, Elm, Salt and North Fork in northern Texas. Because of the red mineral rock in the headwaters, the river got the name Red River. In the past, the Red River was also the border between the United States and the Viceroyalty of New Spain. The Red River estuary is divided into two parts. About 110 km northeast of the city of Baton Rouge in Lousiana, two arms form, the western part of which flows into the Atchafalaya River and the eastern part into the Mississippi. In Louisiana, the Red River intersects the northern part of Louisiana diagonally from northwest to southeast.

Ouachita River
The Ouachita River is a tributary of the Red River and has a length of about 970 km and flows in southern Arkansas and northern Louisiana. The source of the river is found in the Ouachita Mountains in the state of Arkansas. From there it flows in a southeasterly direction towards its mouth in the Red River south of the small town of Jonesville. The lower section of the Ouachita River is navigable and is used for traffic, while in the upper section it is used for recreation and is popular with anglers and hikers.

St. Francis River
The 686 km long St. Francis River flows through the states of Missouri and Arkansas. It rises in a granite rock region in southeast Missouri and flows steadily south through the Ozarks and the St. Francoir Mountains near Missouri’s highest point, the Taum Sauk. The St. Francis River also forms part of the border between Missouri and Arkansas until it crosses it at Missouri’s lowest point to Arkansas, where it finally flows into the Mississippi. In Missouri, it flows through the Mark Twain National Forrest, the Sam A. Baker State Park and the cities of Farmington, Greenville and Fisk. The Missouri white water competitions have been held there since 1967. The main disciplines of this competition are white water slalom and white water races.

White River
The White River is 1,162 km long and flows through the states of Arkansas and Missouri. It rises in the Boston Mountains in northwest Arkansas and flows to Missouri, where it forms Lake Taneycomo near the city of Branson, a reservoir that is held by the dam at Powersite. The river then loops back to Arkansas, where it flows into the Mississippi to the southeast.

Ouachita Mountains
The Ouachita Mountains, or simply Ouachitas, are a mountain range that is located in the southeastern part of Oklahoma as well as in the western part of Arkansas. The Ouachita Mountains are a very old fold mountain range that originated around 300 million years ago. At the time the Ouachita Mountains were formed, they were roughly the height of today’s Rocky Mountains, but were eroded a long time ago due to their great age and are therefore more of a chain of hills in direct comparison. Their highest peak is Mount Magazine with a height of approx 839 m, which is also the highest elevation in the US state of Arkansas. Unlike most mountain ranges in the United States, the Ouachita Mountains run east-west instead of north-south. The Ouachita National Forest (Arkansas and Oklahoma) is located in the Ouachita Mountains, the Hot Springs National Park (Arkansas) and many other state parks. The Ouachita National Recreation Trail (Arkansas and Oklahoma) also runs here. This approx. 360 km long hiking trail leads through the mountain landscape and connects the Pinnacle Mountain State Park in Arkansas with the Talimena State Park in Oklahoma. For those who do not want to hike, the National Scenic Byway (comparable to the German concept of vacation or panorama roads) “Talimena Scenic Drive” offers itself, which is about 87 km long from Talihina in southeastern Oklahoma via Oklahoma State Highway 1 and Arkansas Highway 88 to Mena in southwest Arkansas.

Ozark Mountains
The Ozark Mountains, or simply Ozarks, are a highland region that covers almost half of the state of Missouri. Other states in which parts of the Ozarks are located are Arkansas, Oklahoma and Kansas. The heart of the Ozarks are the Saint Francois Mountains. The Ozarks form a huge plateau around them. With 122,000 km², the Ozarks are by far the largest mountain region between the Appalachian Mountains and the Rocky Mountains. However, the highest point in the region is only 540 meters above sea level. The Ouachita Mountains in Arkansas are often still included in the region. Ozark Mountains and Ouachita Mountains are correctly referred to as the US Interior Highlands. It is the only major mountainous area between the Appalachian Mountains in the eastern United States and the Rocky Mountains in the western United States. 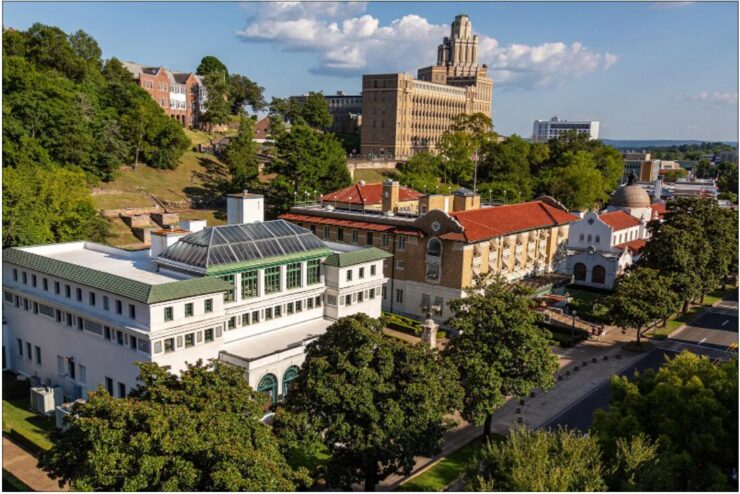 Lakes and reservoirs in Arkansas

Bull Shoals Lake
The Bull Shoals Lake is located in the northern part of Arkansas in the Ozark Mountains. With an area of ​​approximately 15,630 km², it is the largest lake in Arkansas. The White River has been dammed here since 1951. When the dam was completed, it was the fifth largest dam in the world. In addition to flood control and energy generation, Bull Shoals Lake is a popular local recreation area. The Bull Shoals-White River State Park is also on the shores of the lake.

Lake Ouachita
Lake Ouachita is located in western Arkansas near the city of Hot Springs. With an area of ​​approximately 160 km² it is smaller than Bull Shoals Lake, but still the largest lake that is completely in Arkansas. The Ouachita River has been dammed here since 1953. Since Lake Ouachita is entirely within the Ouachita National Forest, visitors will find an intact and very enchanting nature.

Lake Hamilton
Lake Hamilton is located together with Lake Catherine near the city of Hot Springs and together the lakes represent an important destination for excursions. After their creation in the 1920s and 1930s, the two reservoirs played a major role in promoting tourism in the region.