According to Abbreviationfinder, with population of 731,545, Alaska is the 49th largest state among U.S. 50 states, and AK is the two letter abbreviation for Alaska. Here, we provide a list of major rivers and mountains in the state of Alaska. 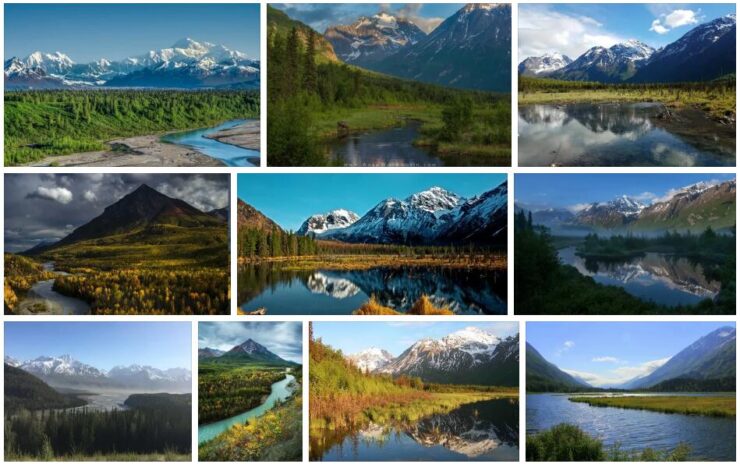 Yukon River
With the Nisutlin and Teslin, the Yukon River is a roughly 3,185 km long river that rises in Marsh Lake, a lake in the Canadian territory of Yukon, and mostly flows westwards over an extensive river delta on the northwest coast of Alaska into the Beringsee flows out.

The Yukon also became known in Europe when, during the Klondike gold rush between 1896 and 1898, the Yukon played a major role as an access and replenishment route to Dawson.

After the Klondike Highway was opened in 1955, the traditional rear-wheel steamer could no longer operate due to the bridges being too low. The importance of the Yukon as a transport route is therefore now only of local importance.

Beaver Creek
Beaver Creek is an approximately 290 km long river in the interior of Alaska.
The river rises north of the city of Fairbanks and at Beaver in the Yukon River.
Since 2008, the river has been the eighth most endangered river in America after gas and oil exploration has become known.

Colville River
The Colville River is a 560 km long river in northern Alaska. The river rises in the De Long Mountains and flows near Nuiqsut into the Beaufort Sea, part of the Arctic Ocean. The river is frozen over half of the year. If the ice cover of the river is thick enough, the river serves as a transport route and is used by trucks. This can be seen in the US documentary “Ice Road Truckers”.

Copper River
The Copper River has a length of approx. 480 km and flows in southeast Alaska. The river originates from the Copper Glacier in the Wrangell Mountains. The river flows into the Gulf of Alaska approximately 100 km southeast of the city of Cordova. The river is best known for its huge salmon deposits. The river delta also provides a habitat for many birds, making it an excellent place to observe them.

Innoko River
The Innoko River has a length of approx. 805 km and flows in western Alaska. The river rises in the Ksukoswim Mountains and flows into the Yukon River.

Kobuk River
The Kobuk River has a length of approx. 450 km and flows in northwest Alaska. The source of the river is in the Endicott Mountains. The river flows into a wide delta in the Kotzbue Sounds. The name Kobuk means “big river” in the Inuit language.

Kuskokwim
The Kuskokwim River has a length of approx. 1,165 km and flows through the southwest of Alaska. The beginning of the river is the confluence of the East Fork and the North Fork. The river flows into the Bering Sea. The river is the longest unhampered river in the entire United States.

Tanana River
The Tanana River has a length of approx. 1060 km and is a tributary of the Yukon River. Tanana means mountain river in the Athapaskan language. The river rises in the Wrangell Mountains in southeast Canada and flows into the Yukon River. During its course, the Tanana River forms a large swamp area, the so-called Tanana Valley. The tanana continues to serve as evidence of global warming. Since 1917 there is the so-called “ice bet”, which is about guessing the day when the ice breaks on the Tanana. Nowadays the ice breaks about 5 days earlier than in 1917.

Denali, Mount McKinley
At 6,194 m, Mount McKinley (Denali) is not only the highest mountain in the state of Alaska, but also the highest mountain in North America. The first ascent of the mountain happened in 1913. Nowadays there are significantly more climbers who dare to climb in the climbing season from April to July. The mountain has been named after the 25th President of the United States, William McKinley, since 1901.
From August 29, 2015, the mountain was officially renamed Denali by decree of the Geographic Names Information System on the instructions of Interior Minister Sally Jewell and in coordination with President Barack Obama. This name comes from the language of the Athapaskian language of the indigenous people of the Koyukon.

The Denali is in the mountain range called Alaska Range in the south of the state. The Alaska Range, the highest mountain of which is Denali, stretches approximately 650 km in length and runs from the Aleutian Range in the southwest to the Wrangell Mountains in eastern Alaska. Due to the incredible beauty of this landscape, there are numerous nature reserves in the area of ​​the Alaska Range. The best known are certainly Lake Clark National Park and Denali National Park.

Mount Saint Elias
Mount Saint Elias has a height of approx. 5,489 m and, because it rises directly from the sea level, is the relatively highest mountain in the world. Mount Saint Elias is the second highest mountain in the United States and Canada. The first ascent of the mountain took place in 1897 by the Duke of Abruzzo. Mount St. Elias is located in Wrangell-St Elias National Park and in the mountain chain of the Saint Elias Mountains (Engl. Saint Elias Mountains). This mountain range stretches over 400 km in southeast Alaska. In addition to Wrangell-St.-Elias National Park, Glacier Bay National Park is also in the Elias chain. Since the Elias chain is covered by numerous glaciers, it forms the largest ice field on earth after the Poles.

Becharof Lake
With an area of ​​approx. 1,200 km², the Becharof Lake in southern Alaska is the second largest lake in Alaska after Lake Iliamna.
Becharof Lake has a length of approx. 60 km and a width of approx. 25 km depths up to 180 m and is named after the Russian navigator Dmitri Botscharow, who explored Alaska in 1788.

The lake is located in the Becharof National Wildlife Refuge and is therefore a very good habitat for numerous animal species. For example, the lake is the second largest spawning area for sockeye salmon.
Other animal species to be found here are bears, reindeer, elk, wolves and bald eagles.

Iliamna Lake
With an area of ​​2,622 km², Iliamna Lake is the largest lake in Alaska and the eighth largest in the USA.
The lake has a maximum width of approx. 35 km and a maximum length of approx. 120 km and can be up to 300 m deep. The lake is located in southern Alaska and is covered with ice from December to May. The lake is a popular destination for sport fishing because it has large populations of salmon and trout. In the area around the lake there is also the legend of the Iliamna Lake Monster, which is said to resemble a giant white sturgeon.

Kenai Lake
Kenai Lake in southern Alaska on the Kenai Peninsula is a 40 km long, relatively narrow lake and the source of the Kenai River. The shape of the lake is reminiscent of an S and the mountain lake is a good area for fishing because the occurrence of salmon is famous. The lake also invites you to other outdoor activities such as hiking.

Lake Clark
With a maximum length of approx. 65 km and a maximum width of approx. 8 km and an area of ​​approx. 370 km², Lake Clark in southern Alaska is the sixth largest lake in Alaska and a relatively narrow lake. The lake is located in Lake Clark National Park, which it also gives its name to, and is an important spawning area for salmon.

Selawik Lake
The Selawik Lake is the third largest lake in Alaska with approximately 1,050 km² and is located in the northwest of the state near the city of Selawik. The Selawik National Wildlife Refuge borders on the lake and is known for animal species such as grizzlies, polar wolves, elk and musk ox. Also a herd of caribou moves through the area on their annual hike.

Tangle Lakes
The Tangle Lakes in the center of Alaska are an approximately 30 km long chain of lakes, which are connected by rivers and, among other things, is the source area of ​​the Delta River. The area around the lakes is a tundra landscape and very popular with many visitors. The Tangle Lakes are considered one of the top addresses for kayak and canoe athletes. There is a campsite at Round Tangle Lake and is also the starting point for boat trips on the lakes. 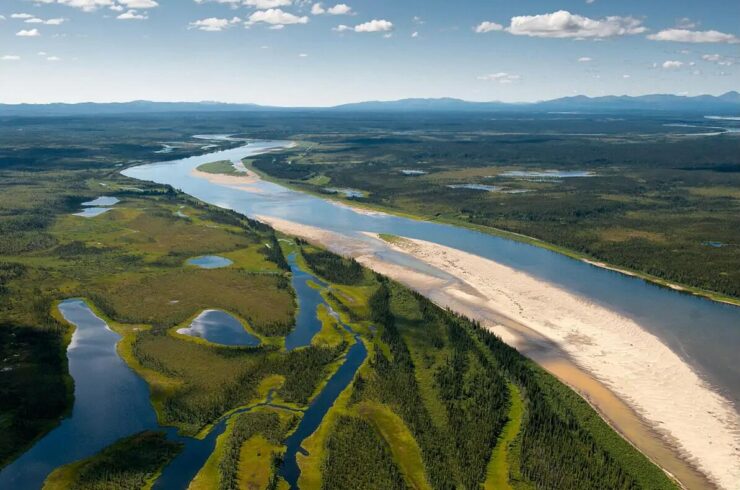