In 1944, another long-standing issue was closed with the arbitration of Chile: that of the borders with Costa Rica. Meanwhile, however, the liberal party, led by F. Arias Pamedes, asked for a new Constitution and Arnulfo Arias, decreeing the unconstitutionality of the election of de la Guardia, asked for his resignation.

In fact, after dissolving the Assembly, he started the new elections, which were held on May 6, 1945 and which confirmed the ruling party; so de la Guardia remained in office but until June 15, when he resigned leaving the post to the provisional president LA Jimenez.

In 1945 relations with the USSR were resumed and the new Constitution was approved; the office of the provisional government was extended until 1948; some important public works were carried out, such as the airport and the Panama power plant. But the budget remained precarious and in December 1946 wages had to decrease for state employees; while in July, again in 1946, the Supreme Court acquitted A. Arias of the charge of inciting the revolution, for which he had been released.

But a more serious situation had to be discussed, that of the North American military bases; after long negotiations, in January 1948 the US troops all withdrew to the “Canal Zone”.

In July 1948, turbulent elections brought yet another provisional to the presidency: E. Obarrio. This election was however contested and invalidated by the Supreme Court and then the presidency went to D. Diaz Arosemena, prevalent over A. Arias, who was arrested again in Costa Rica always on the same charge of instigating the revolution. On 1 October 1943 D. Diaz Arosemena took office and removed the existing state of siege.

But the economic situation showed no signs of improving. There were always: poor export because it was based only on one product; 1’analfabetismo; the insufficient industrialization and the very poor stability of the various regimes. All this had brought only disorder and misery.

According to Abbreviationfinder, an acronym site which also features history of Panama, the elections of 1949 brought Arnulfo Arias back to the presidency, supported by police chief Josè Antonio Remon. Unrest and repeated coups d’etat, with the succession of other very short various presidencies, meant that on 11 May 1952 regular elections brought Josè Antonio Remon to power, who, in truth, had been the ruler of the political scene in recent years of Panama.

To impose order in the country he adopted dictatorial methods and then, with the precious collaboration of his wife Cecilia, to improve the economy, he took courageous drastic measures but, above all, after laborious meetings lasting 16 months, he obtained from the United States the increase of Canal fee from 430,000 gold pesos to 1,990,000 dollars.

In January 1955 Remon was assassinated but the Vice-President who was to replace him, Josè Ramon Quinzado, was unable to take power because he was suspected of complicity in the murder. The provisional office was assigned to Ricardo Arias Espinosa until Ernesto de la Guardia junior was elected in May 1956.

He immediately faced agitation and unrest so that in May 1958 he was forced to suspend constitutional rights.
The elections of May 21, 1960 decreed the defeat of the candidate of the ruling party and in fact the liberal candidate Roberto F. Chiari was elected.

The recurrent socio-economic crises of Panama, all deriving from the Canal Zone, brought strong frictions with the United States because their permanence on the territory prevented the Panamanian government from exploiting the subsoil and expanding the territorial waters.

Agreements were reached in 1962 with wage increases for canal workers, but in 1964, demonstrations and incidents occurred in the Canal Zone as a result of events in Egypt with Nasser and Cuba with Castro.

North American soldiers fired on demonstrators causing dozens of deaths. Diplomatic relations between
the two countries were broken and all requests for intervention from the United Nations, the OAS and the International Court of Justice were unnecessary to obtain the revision of the treaty standing already in 1903.

For the recognition of these rights, the new president MA Robles, designated by the elections of 1964, fought very energetically.
The United States in turn threatened to open another channel in Colombia, or one between Nicaragua and Costa Rica. This would have decreed the definitive ruin of Panama which, therefore, had to freeze the matter, pending better times.

Robles’ heaviest task was to calm the opposition, always instigated by A. Arias. Meanwhile the negotiations between the two countries continued and in 1955 led to a general agreement, which was however made known in 1967. With it the previous treaty was canceled, the administration of the Canal was exercised jointly while the sovereignty of Panama was recognized undisputed in the area.

No one liked this pact and it was not signed. The elections of 1968 they saw A. Arias elected, who was deposed only twelve days after his inauguration and replaced by General O.Torrjios who ruled with the help of a military junta.

In December 1970 an attempt was made to return to constitutional systems with a people’s uprising which failed but achieved at least one small result, that of changing the Military Junta into a Mixed Junta, precisely with the participation of some civilians. The negotiations for the canal were continued without success; not even Kissinger’s personal efforts, in addition to official interventions as Secretary of State, led to an agreement.
Torrjios multiplied his efforts to improve the situation in the country and proclaimed 1975 “the year of productivity”.

This led to September 7, 1977, under the presidency of Carter in the United States, with the signing of an agreement that assigned the passage of the “Canal Zone” to Panamanian sovereignty until December 31, 1999.

On 11 October 1978, Aristide Royo Sanchez was elected President of the Republic, while Torrjios maintained the command of the National Guard.

In 1980 the first multi-party consultations took place; in 1983 there was a constitutional reform, approved by referendum, whereby it was established that the election of the president would be direct and the mandate of 5 years.
Meanwhile, after Torrjios’ death in 1981, the National Guard, which later called itself the “National Defense Force”, saw some generals alternate and finally entrusted the command to General MA Noriega Morena.

The presidential nominations were also varied, and finally, in September 1985, EA Delvalle was elected.

To fuel the increasingly serious economic crisis was the increase in external debt; austerity measures were proposed and the tension grew. Then it worsened even more when in 1986, from many sides, General Noriega was accused of being involved in the political murder of the opponent H. Spadafora, of being involved in drug trafficking, in the illegal sale of weapons to Iran on behalf of the United States and finally in the recycling of these black funds through Panamanian Banks
In February 1988 President Delvalle attempted to remove Noriega from his post, instead he was to be dismissed by the Legislative Assembly, for violation of the Constitution.

In 1989 there were general consultations with the presentation of two candidates: the leader of the PRD, C. Duque Jaen, and G. Endara Galimany, supported by the ADOC, or “Alianza Democratica de Oposicion Civilista”.

Chaotic events followed one another until in December 1989 General Noriega assumed power as Head of State. A few days later the United States invaded Panama and Noriega was forced to hide in the Apostolic Nunciature. On January 3, 1990 he surrendered to North American troops, underwent a trial and in July 1992 he was sentenced to 40 years in prison for drug trafficking.

The US invasion of Panama, condemned by the UN, OAS and all Latin American states, assigned the presidency to Endara who administered power with a coalition government and since the external debt had grown, he sought to remedy by kicking off privatizations, and cuts in public spending.

Popular discontent was skyrocketing, fueled also by the certainty that Endara was the facade of who was actually holding the reins of the country, that is, the United States.
From the autumn of 1990 to June 1992 there was a succession of strikes and unrest that prevented George Bush, then President of the United States, from his planned visit to Panama.

On the political level, Endara, also suspected of corruption and involvement in drug trafficking, had no consensus in the subsequent elections that led to the presidency in 1994 by the PRD candidate, E. Perez Balladares, who, to bring Panama back into legality and peace, immediately constituted what was called the government of “National Reconciliation”.

This government of National Reconciliation, however, did not deal with those problems that had always been considered of primary importance, namely to combat drug trafficking, unemployment and increased poverty. Instead, he gave priority to the modernization of the means for the economy and to the incentive of investments that required an enormous use of finances, which are not available at all. With this program, the focus was on tax reform, the privatization of certain public enterprises and the reduction of labor costs to make Panamanian exports more attractive. Retirement reform was also carried out and this resulted in a gigantic demonstration by 40,000 public employees in October 1996.

Meanwhile, in June of that same year, a bill had not been drawn up which, with an extensive amnesty, would restore freedom to a thousand generals of the Noriega army, members of the Democratic Revolutionary Party. Furthermore, the executive was placed in the minority by some scandals related to the laundering of illegal money coming from international illicit trafficking, especially drugs.

Some prominent representatives of the Democratic Revolutionary Party were involved in those trades and even the new president had to admit that he had obtained funding from the drug for his election campaign. 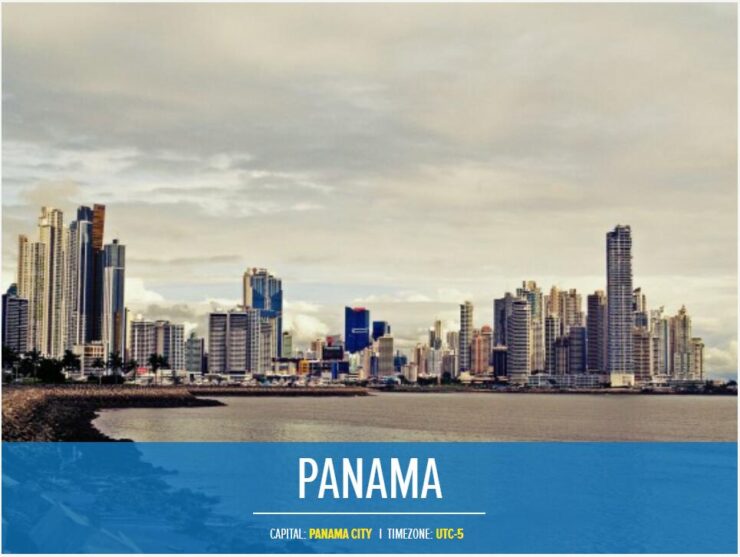 Among so many difficulties of management, Balladares called a popular referendum with which asked to annul a constitutional rule that forbade the president-in-office from proposing himself candidate for a second consecutive presidency. On August 30, 1998 the people spoke out against the removal of that rule.

In May 1999 the presidential elections were won by M. Moscoso, widow of Arias, candidate of the Union of Panama, center-right.

Internationally, economic relations with Japan, China and South Korea were strengthened. Those with Colombia deteriorated due to the invasion of Darien by thousands of guerrillas, both right and left, coming from from that country.

With the United States, on the other hand, there was a stalemate, especially as regards the occupation of the “canal area”. This was expected until December 31, 1999. Various plans were studied to extend the US presence in the area, in anticipation of the various difficulties that would arise after their withdrawal. And in December 1997 an agreement was drawn up: one of the US military bases would be replaced by a regional drug center, manned by Panamanian and Latin American units, but above all by 2000 US soldiers.

Since, however, the United States asked that their troops not be used only in the control of drug trafficking, but could play a role of some importance, and for a period longer than ten years, the agreement was not reached and on December 31, 1999 the canal area returned under the jurisdiction of the Panamanian state.