President Daniel Ortega (in office since 2007) had long been determined to be re-elected a second time in the national presidential and parliamentary elections on November 6, 2016. All the prerequisites for this were in place: he had the advantage of being the incumbent with high approval ratings in the population, the re-election ban had completely disappeared from the constitution in 2014, and economic development continued to be dynamic in 2016. Certainly there were also some dark clouds on the horizon, such as the severe crisis of the allied government in Venezuela and the uncertain future of the canal project. But it turned out that the greatest threat to credible re-election came from the machinations of the president himself. First of all, Ortega’s categorical refusal to to allow the elections to be observed by independent institutions at home and abroad. After the irregularities in the re-election in 2011 and in the local elections in 2012 and 2014, everyone in the country knew that the supreme electoral authority CSE (Consejo Supremo Electoral) had long since lost its independence. At their head was still that controversial Roberto Rivas, an unconditional, rabid and corrupt supporter of the president who has since had to be dismissed.

The political opposition had been in a miserable state for years. Nevertheless, under the leadership of the influential liberal Eduardo Montealegre (PLI), she prepared for November 6th and founded the electoral alliance “Coalición Nacional por la Democracia” (CND). The Sandinista dissidents from the MRS and some smaller parties joined this alliance. But in June there was a bang that threw the opposition out of the running and changed the panorama fundamentally. The Constitutional Chamber of the Supreme Court stripped Montealegre the legal power of attorney for the PLI and transferred it to his internal party adversary, the largely unknown Pedro Reyes. The judiciary had thus cleared the candidacy of the entire opposition alliance CND out of the way. The MRS was not even able to stand independently because eight years ago the status of a political party and the right to draw up its own list were withdrawn. The opposition therefore had no choice but to call for abstention from voting and to challenge the legitimacy of the election result.

Finally, at the beginning of August, Daniel Ortega nominated his wife Rosario Murillo as a candidate for the office of Vice President. Only at the dark time of the second Peronism in Argentina has there been a case in Latin America that a party audillo ran together with his wife. The nomination of the Primera Dama came as no surprise, but it did evoke traumatic memories of the rule of the Somoza family and the dictatorship of times long past.

In the elections on November 6, 2016, President Daniel Ortega was re-elected for a new term of five years, as expected, with 72.4% of the valid votes, and the FSLN party again won a two-thirds majority in parliament with 65.9%. The second strongest political force with 15.3% of the vote was the PLC (Liberal Party around Arnoldo Alemán). This party had disappeared into oblivion in 2011 with only 6%, and its “rebirth” can only be explained by the elimination of the opposition in the run-up to this election, especially the PLI (Liberal Party around Eduardo Montealegre) and its electoral alliance CND (see above). The opposition describes this election as a “farce” without any validity or legitimation. In the large number of non-voters and invalid votes, she saw a clear vote against a renewed mandate for Ortega and his wife. According to unbelievable information from the electoral authority CSE, the turnout was 68.2%, which resulted in an abstention of 31.8%.

When the president took office again on January 10, 2017, the power of the president was greater than ever. Even then, governing became more difficult for Ortega. The European Parliament demanded on 16 February 2017 the government “to respect the principles of the rule of law, democracy and human rights,” referring even directly to the reprisals against Francisca Ramirez, the leader of the farmers’ protests against the sewer from Nueva Guinea. The wind from Washington was much colder than before. On March 3, 2017, the State Department labeled Nicaragua’s political regime “authoritarian”and charged “general corruption” in the state apparatus. It was clear that these clear words could have a very concrete effect in the economic field, because at the same time the so-called Nicaragua Act (“Nica Act”) was introduced in Congress. This law (now passed, see below) not only provides for severe sanctions against the government and officials in Nicaragua, one of countries in Central America according to cheeroutdoor, if they are involved in cases of corruption, violation of human rights or money laundering. In addition, the Nicaraguan government must be refused loans and development cooperation (also by multilateral donors) if it violates human rights and does not comply with democratic standards.

Local elections were held on November 5, 2017. As expected, the FSLN won the elections in 135 of a total of 153 municipalities. The Sandinista Reyna Rueda Alvarado became mayor of Managua. Arnoldo Alemán’s liberal PLC became the second largest party with 11 mayor’s posts. The Indian party YATAMA lost its previous mayor and did not recognize the election result. The Frente por la Democracia (FAD), which was not allowed to run as a party in the elections, again made the widespread abstention from voting the main object of criticism.

The economic situation in the country and the prospects for 2018 were still viewed positively until the protests broke out in April 2018 (see below). The World Bank particularly praised the fact that the current account deficit could be reduced from 8.6% of GDP (2016) to 6.1% in 2017. However, the International Monetary Fund urged a “reform” of social security and demanded that state subsidies for electricity consumption for poor customers and pensioners be abolished. The government responded with the compromise that subsidies for electricity costs should be gradually reduced over the next few years. However, the growing social security deficit posed a sensitive problem for the government, the government’s financial leeway had become increasingly narrow due to the budget deficit in the public sector and the permanent elimination of the special funds from Venezuela. The magazine spoke in an analysis of the political situation ENVIO of the fact that the seven years of the “lean cows” heralded. 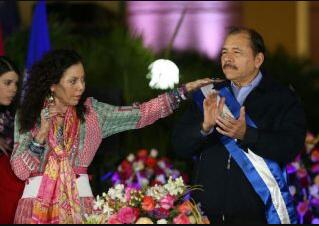