On January 17, 2020, the Alianza Cívica (AC) and the Unidad Azul y Blanco called for the formation of an electoral alliance under the name ” National Coalition (Coalición Nacional / CN) “. This step was long overdue, because until then there was neither a political program nor a political party on the part of the opposition that could be elected in the event of a turnaround. It was clear to everyone that the national elections in autumn 2021 would have to be carried out democratically and that a promising alternative to the ruling FSLN would have to be available. Alianza Cívica put together a policy paper for the content of the National Coalition which contained the well-known demands of the opposition, including: justice without impunity, an end to the dictatorship, respect for human rights, democracy through elections and free political activity, effective separation of powers and the fight against corruption, full autonomy of the universities, recognition of the autonomy rights of indigenous people and Afro-American populations, etc. The AC declared itself non-violent and declared the need for a “new political culture” without caudillism, based on full transparency and citizen participation. The armed forces were to be “restructured” and the paramilitary groups dissolved. The paper also contained specific demands such as the unconditional release of all political prisoners, the safe return of all exiles, the cancellation of the canal concession (Ley 840), the ban on the re-election of the president and the protection of nature and the environment. In the economic and socio-political area, a new development model was called for, which should be oriented towards “sustainable human development”.

On February 25th, the founding meeting of the Coalición Nacional (CN) took place in Managua. The chairmen of seven parties or organizations signed a coalition agreement so that they could stand together in the next elections. These are the “Alianza Cívica”, the “Unidad Azul y Blanco” (UNAB), the Partido Liberal Constitucionalista (PLC), the indigenous party “Yapti Tasba Masraka Nanih Aslatakanka” (YATAMA), the “Partido Restauración Democrática” (PRD ), the ex-contra association “Fuerza Democrática Nicaraguense” (FDN) and the farmers’ party “Movimiento Campesino”. In the months that followed, the new coalition was unable to make a name for itself with political and programmatic initiatives. Instead of mobilizing the opposition base and getting it on the way to forming political parties, she allowed herself to be thwarted by the traditional disputes and rivalries of Nicaraguan politics. The well-known politician Félix Madariaga from UNAB had to be in one in mid-August 2020 Grant interview that the National Coalition is in a “crisis” that calls into question its “political architecture” as a whole. He was referring to the behavior of the PLC, which, despite its subordinate importance, assumed a special role and wanted to defend the remains of the earlier “two-party system”. On the other hand, there was an ongoing conflict with the representatives of youth and students, who have been so important since 2018, of whom only a few are still involved in the national coalition. The resignation of the well-known writer Gioconda Belli from the management of the Alianza Cívica on August 27 was also an alarm signal.

On October 26th, the leadership of the Alianza Cívica (ACJD) made the far-reaching decision to withdraw from the National Coalition which it has formed together with UNAB and smaller political parties since February 2020. The project of leading the opposition into the election year 2021 with a platform of the broadest possible unit has thus suffered damage that can hardly be repaired. The ACJD emerged as a political group from the midst of the protest movement of 2018 and has since been the main mouthpiece and center of action for the opposition. In the decisive vote, there were 15 votes in favor of leaving, while 6 members voted against. The yes votes came from the group of business associations (COSEP, AMCHAM etc.), including the prominent politicians Adán Aguerri, Michael Healy and Juan Sebastián Chamorro. They pushed for the exit and were in doing so by the student representatives, including figureheads of the 2018 protest like Lester Alemán and Valeska Valle. The well-known pedagogue Carlos Tunnermann (previously chairman of the ACJD), Azahálea Solís (advocate for feminist initiatives), Padre Idiáquez (rector of the UCA), Prof. Ernesto Medina and others voted against it ACJD quit some time ago. Nicaragua is one of countries in Central America according to ehealthfacts.

For years, the question of how long the unity of the protest movement of 2018 could be preserved has been in the room. In the ACJD alone, such extremely contradicting interests were represented, such as the private business community, the protesting small farmers of the south, the independent women’s groups and the militant students (“autoconvocados”) from universities. With the widespread opposition groups from the UNAB and the heterogeneous political organizations that joined in February, the picture naturally became further complicated, and the National Coalition had long been blocked by internal disputes. Theoretically, an exit could act like a cleansing thunderstorm if the cards are put on the table and a new formation of the organizations is tried. The clear definition of different interests could also serve this purpose. This is indispensable for the formation of new political parties and in no way excludes cooperation against the incumbent government. Unfortunately, none of this can be said at the moment. The exit from the National Coalition initially led to a split and destruction of the ACJD itself, because the representatives of the no votes have since resigned. At the moment there is an embarrassed silence and only the pile of broken glass is in the opposition’s shop window. 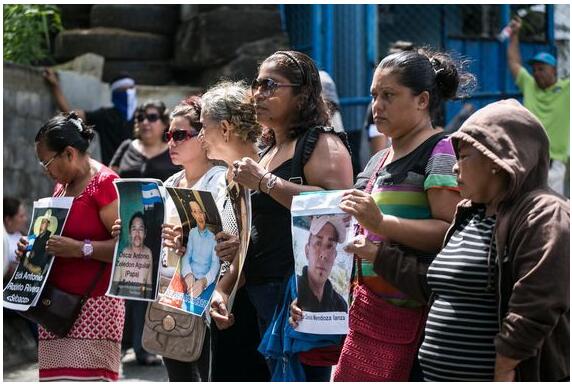