In autumn 2018, however, the balance of power in the country shifted significantly. President Ortega was able to consolidate his position and went over to criminalizing and targeted prosecution of the opposition. The number of detainees facing conviction for coupism, terrorism, etc., was estimated at 500 to 600 in July 2018. According to the opposition “Alianza Cívica”, the number of political prisoners grewby February 2019 to a total of 767. Of these, 113 have already been sentenced to absurdly high sentences. The peasant leaders Mairena (himself a long member of the “Alianza Cívica”), Mena and Icabalceta were sentenced to 216, 210 and 159 years in prison respectively in a show trial, although the maximum legal sentence in the country is limited to 30 years. There are also 149 cases of “disappeared” people who are likely to have been the victims of extrajudicial executions. Many political leaders and activists have to go into hiding. An estimated 50,000 to 100,000 have already fled into exile abroad. The repression measures against freedom of expression and freedom of the press and the human rights organizations have since been intensified.

Because of the persecution and criminalization, the opposition had only limited room for maneuver. Nevertheless, on October 4, 2018, it created a new umbrella organization called “Unidad Nacional Azul y Blanco” (UNAB). The UNAB, together with the “Alianza Cívica”, is on the line of broad, national unity against the government of Daniel Ortega. A total of 43 social organizations have joined it, many of them from the grassroots movements of the “Articulación de Movimientos Sociales”. The private sector is holding back with its own actions and initiatives, but has by no means reconciled with Ortega. Mario Arana, the newly elected Chairman of the American Chamber of Commerce AMCHAM, and José Adán Chaverri, the head of the business association COSEP, leave no doubt that their associations will remain part of the opposition alliance Alianza Cívica.

The domestic political situation in Nicaragua, one of countries in Central America according to dentistrymyth, did not calm down in 2019. The Ortega government had to contend with major problems, with foreign policy isolation and the acute economic crisis in the foreground. The USA had called for new elections several times, and the so-called Nicaragua law(“Nica Act”) entered into force. This law contains a whole package of sensitive sanctions. There is no doubt that it has noticeably increased the pressure on Ortega. The European Parliament has condemned human rights violations in Nicaragua in several resolutions and called for a return to democratic conditions. The United Nations, the Organization of American States, the Vatican and many governments of other states have made similar statements. It should also be mentioned that the FSLN was expelled from the “Socialist International” in January 2019 for violating civil rights, persecuting journalists and disregarding basic values .

In this situation, President Ortega offered talks with the opposition on February 21, so a return to dialogue. He first spoke behind closed doors with the country’s most important economic bosses. This detail gives an important indication of Ortega’s intentions: He obviously wanted to build on the close cooperation with the private sector over the past decade. It was now his interest to avoid the deepening of the economic crisis and to reverse the painful sanctions on the part of the USA. The representatives of the business associations (COSEP, AmCham, etc.) have remained on an oppositional course to this day. The first meeting of the government delegation with the “Alianza Cívica” took place on February 27th. The Alianza Cívica delegation called for the release of all political prisoners and the restoration of political freedoms as a precondition for all further talks. In fact, on March 29, the first government-opposition agreement was signed. It provided for the full release of all political prisoners within 90 days. This should include the termination of their criminal proceedings.

However, the talks had been blocked again since the end of March. The government released groups of prisoners in batches, but was far from fulfilling the agreements of March 29th (for more information on the issue of political prisoners see under “Human rights and corruption). At the end of June the agreed period of three months passed without a solution vision came. on July 19, Daniel Ortega made in his speech on the 40th anniversary of the Sandinista revolution very clear that he would not continue to talk with the opposition (despite their offer to continue the dialogue). the interruption of the dialogue came just as surprising and arbitrary as the interview offer in February. Linked to this was the reference to the “elections in 2021”, ie his unwavering intention not to resign by then.

With the four-month episode of “Dialog” Ortega was able to buy time again. Essential foundations of his regime have been politically lost, above all the close cooperation with private entrepreneurs and the foreign policy safeguarding of his long successful economic model. But he kept control of the ruling apparatus. The state bureaucracy, the police, the paramilitary groups, the judiciary and parliament are firmly in his hands. The army, which stayed out of the bloody repression in 2018 and declared it “neutral”, continues to express its unreserved loyalty to the president. The service of Commander General Avilés, who stands for this line, was extended for a further five years on November 18, 2019. According to surveys, the government has suffered a massive loss of confidence among the population. But still around a third of Nicaraguans supported Ortega at the beginning of 2020 and declared that they wanted to re-elect him as president. In addition, the FSLN was still the only relevant variable in the party system. 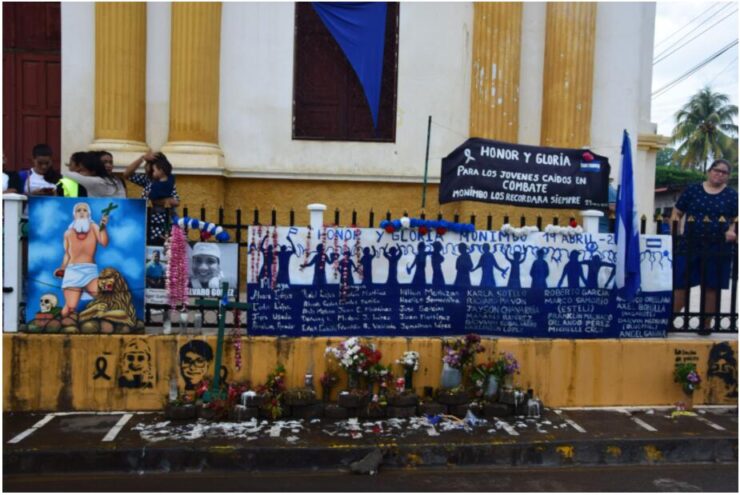