It was no longer just about social security. The anger that had built up against the regime and the Ortega family over the past ten years has now broken out, wrote sociologist José Luis Rocha in the magazine “Confidencial”; he listed some of the scandals: “The revelation that the President of the Supreme Electoral Council, Roberto Rivas, owns luxurious villas in Costa Rica and Spain … the looting of the social security fund, the timber mafia and (illegal) deforestation, mining and even the drug trade”. The Sandinista ex-comandante and dissident Mónica Baltodano brought the causes for the protest movementa simple formula: “The Nicaraguan uprising is caused by a lack of democracy”. Protesters everywhere called the government a “dictatorship” and called for the resignation of President Daniel Ortega and Vice-President Rosario Murillo. During all the actions, the portraits and posters of the presidential couple were torn down, and in Managua numerous “trees of life” (called “Chayopalos” after the nickname of their creator) were brought down and destroyed to the cheers of the crowd. Nicaragua is one of countries in Central America according to constructmaterials.

On Sunday, April 22nd, Daniel Ortega had a television appearance. A tired and obviously weakened president described the protests as a conspiracy funded by the US and the secret services. The government will not allow chaos. However, he initially withdrew the controversial increase in social security contributions and offered the employers and the Bishops’ Conference willingness to discuss further steps. Thereafter, the protest movement continued to develop with undiminished strength and the political panorama changed rapidly. Mass demonstrations took place on April 23, April 28 and May 9against the government, which was all about a broad unity and in which hundreds of thousands participated. From all the reports it was clear that the youth, the students and the women set the tone. The first major rallies were surprisingly peaceful and went unmolested by the police and government thugs.

The brutal attacks on the students and the various protests across the country continued at the same time. The Bishops’ Conference therefore made the start of the national dialogue offered by Ortega dependent on the repression being ended and the deaths and human rights violations of the past few weeks being investigated by an independent commission. To the public horror, the commission documented (at the time) no fewer than 76 fatalities since April 18.

Indeed, on Wednesday May 16, a “National Dialogue” met and coverage from all major media outlets made it an extraordinary event. The dialogue was convened and directed by the Bishops’ Conference. The active opposition and the protest movement are involved in the dialogue through representatives of the students, the business association COSEP, the American Chamber of Commerce AMCHAM, the farmers against the construction of canals, the mothers of the victims, the women’s movement and other groups. President Ortega and his wife, Rosario Murillo, appeared in person for the first session. In a spectacular indictment speech, the students present held them responsible for the deaths and the brutal repression in the country. The National Dialogue met for further meetings,Large demonstration in Managua on Mother’s Day was targeted by snipers and 18 people died. Ortega was then forced a second time to let a CIDH delegation into the country. According to the CIDH in Washington, it has now counted no less than 322 fatalities. This is a conservative estimate that only listed documented cases (as of August 20, 2018). The government counted significantly fewer deaths, namely 197, and claimed that these were victims of the “terrorist” insurgents.

For a long time, hundreds of road blockades in many parts of the country were a sensitive means of exerting pressure on the opposition to demand the resignation of the presidential couple. In the run-up to the celebration of the anniversary of the revolution on July 19, however, the government managed to clear most of the barricades as part of a comprehensive “cleanup”. The battles in Masaya were particularly bitter and bloody, Jinotepe and Diriamba (Dpto. Carazo), where the opposition could count on broad support. The occupation of the national university UNAN by the students was ended with the most brutal means. The occupiers lost two lives and injured many. They had to take refuge in the nearby church Divina Misericordia, from where they could only withdraw through the mediation of the Bishops’ Conference. In his July 19 speech, Ortega massively attacked the Catholic bishops, accusing them of “pursuit of putschist goals”. On July 27, it was 100 days since the riots broke out. The Spanish newspaper “El País” published on this date a review of the development of the protest movement.

Shortly after the outbreak of the protest movement, the opposition formed the “Alianza Cívica por la Democracia y la Justicia”. The student leaders, José Adán Aguerri from the business association COSEP and the former minister of education Carlos Tünnermann emerged as speakers in the context of the national dialogue. They consistently avoided party-political demands and focused entirely on achieving an end to repression, the resignation of the presidential couple and an independent investigation into human rights violations. 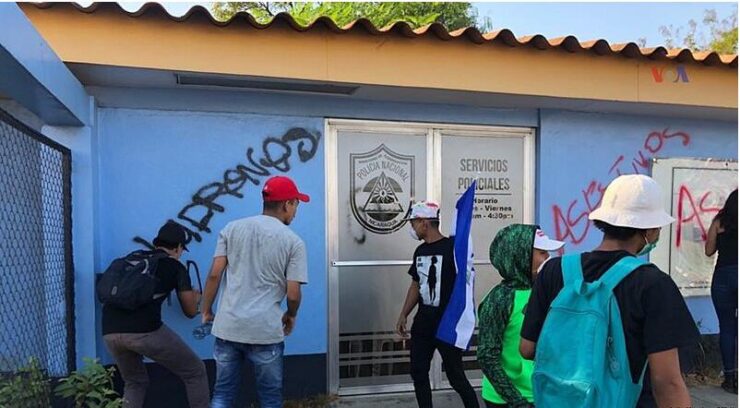