In 1979 the dictator Somoza was overthrown in Nicaragua, one of countries in Central America according to computergees, by the Sandinista Revolution. The new beginning brought democracy and made the country a popular figure, but could not prevent Nicaragua from becoming the second poorest country in Latin America. The then President Daniel Ortega has been re-elected twice since 2007 (2011 and 2016). Today a broad protest movement calls for his resignation.

Massive protests against the government since April 18, 2018

The escalation of the disputes over the “reform” of the INSS social security then came much faster and more massively than expected. The President decided on a package of measures to rehabilitate the INSS without the involvement of Parliament and without the usual consultations with the employers and trade unions. According to this, all pensions should be reduced immediately by a contribution of 5% for health insurance, employee contributions for pension insurance from 6.25% to 7% of wages and employer’s contributions from 19 to 22.5%. The future pension notices would also be massively reduced (up to 30%). This measure was announced by decree in the Law Gazette (Gaceta) of April 16 and should come into force on July 1, 2018.

It caused a stir in the public because the cut in the already very narrow pensions meant a sensitive intervention by the state in the social benefits. Fear spread far beyond the group of 200,000 pensioners affected that the increase in contributions could lead to layoffs in the private sector and thus to more unemployment and informal employment. The employers’ association COSEP, which had stood firmly by Ortega’s side since 2007, protested unusually sharply against the increase in employer contributions and actually threatened the feared dismissal of workers.

On April 18, a protest was held near the INSS headquarters in Managua. When a group of around 200 demonstrators, mostly students and pensioners, gathered, the thugs of the “Sandinista Youth” were already waiting for them. They attacked the protesters, who were still peaceful, with iron bars; several journalists were also beaten and robbed of their equipment. Such scenes of physical intimidation have often occurred during protests against the canal construction and the CSE electoral authority in recent years. This time, however, the government was unable to silence the criticism. On the contrary, the outrage spread like wildfire and within a day a wave of protest took hold the capital and large parts of the country. The actions in Managua were mainly carried out by students. The campus of the Technical University (UPOLI), the National University (UNAN) and the Universidad Centroamericana (UCA) were clearly the focus of the protest in the following weeks.

The determination and militancy of the students, which were decisive for the widespread success of the protest movement from the very beginning, had a special history: On April 3 of this year there was a great fire in the “Reserva del Indio Maiz” nature reserve in the south-east of the country erupted. As the flames spread and attempts to extinguish the fire failed, it became more and more apparent how neglected the government was to protect the environment. Like the black cloud of smoke, there was even the suspicion in the sky that the fire could only be the prelude to a large wave of expropriations in connection with the canal construction plans. The students of the Catholic Universidad Centroamericana (UCA), who had been involved in criticizing the environmental degradation and the canal project for years, then began public protests. They confronted the MP Edwin Castro (FSLN), who also teaches constitutional law at the UCA as a professor, with their criticism. When she was on April 12th intruded into his course and read a protest resolution, they were threatened and insulted by Castro. The video recording of the action spread like wildfire over the social networks and created an indignant mood. The actions of the following days could not be prevented by the official student union (UNEN, controlled by the government), and the first spontaneous and autonomous organizational structures were formed, which already existed and played an important role when widespread protest broke out after April 18. 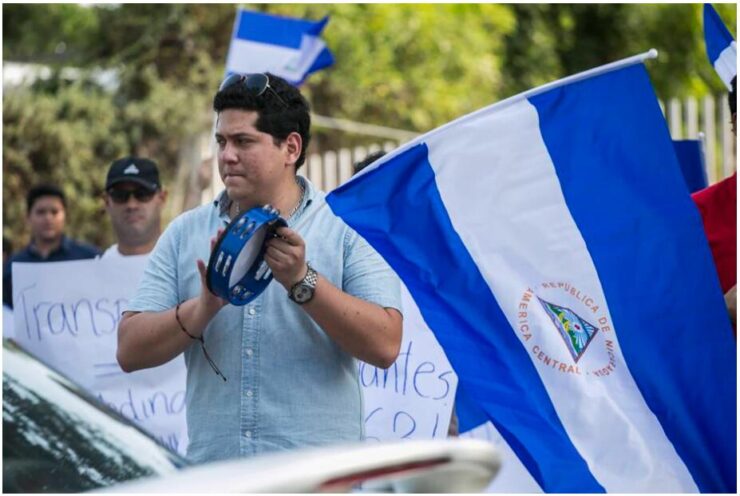