The population is given for 2018 with 6.47 million. The rapid growth of the population, which was 3.0% per year in 1979, has now fallen to 1.3% per year (2018), the World Factbook only gives 0.96% (2020). As in other Latin American countries, increasing urbanization and the changing social role of women have led to a sharp decline in the birth rate. This decline is reflected in the population pyramid of 2020 (see below), because the last twenty-four birth cohorts have become smaller. But still 25.6% of the population are under 15 years of age and only 5.8% are 65 years of age or older. However, this society has to adjust to the fact that it is slowly getting older. Life expectancy today is 75.8 years.

34% of all employees work in agriculture. Even if this percentage is still high in an international comparison, it nevertheless reflects the loss of importance of agricultural economics; In 1950 there were twice as many (68%). The secondary sector (industry and craft as well as construction) now employs 18% of the working population. This number is comparatively low compared to the service sector, in which 47% work (trade, communication, catering, social and personal services). In this area, which is strongly inflated in relation to the manufacturing industry, the large number of street vendors, casual workers, maids, etc. are looking for a barely attainable livelihood under precarious conditions.

The modernization of the agricultural economy in Somoza’s time and the extreme concentration of property (in 1978, 5% of the landowners owned over 50% of the usable land) have seriously damaged rural agriculture and destroyed many rural jobs. The Sandinista revolution attempted to reverse this trend with large-scale agrarian reform, but success largely drowned out with the economic crisis in the late 1980’s and the political turnaround from 1991. Ultimately, large parts of the rural population only had the option of moving to the cities (especially to the rapidly growing metropolis of Managua). But the absorption capacity of the labor market is still very low. The only major innovation is the last resort to migrate abroad.

Those who come to Nicaragua from Germany are often surprised by the enormous diversity of the handicrafts. No matter whether in a well-off or in a poor residential area, everywhere in the neighborhood you will find plumbers, carpenters, mechanics, dressmakers, ironers, gardeners, bakers, bricklayers, mattress makers etc. who do their jobs with diligence and skill. Only later do you notice that most of them do not have their own workshop and even have to borrow their tools. Almost none of them have a formal employment relationship. This form of casual work is recorded by the statistics as “work for one’s own account” (cuenta propia); 38% of all employees work, almost as many as in the salaried and manual workers category (46%). The development of the labor market has caused the number of “self-employed workers” to grow steadily, while the category of “entrepreneurs / employers” (patrono), which in 1950 comprised 13.5% of the working population, has now fallen to 1.3% is. Behind this hides the decline of the farms, the handicraft businesses and the established commercial businesses, which offered their staff a reasonably secure job. Only 37% of the working population today has a formal employment relationship. Two thirds refer to the informal sector of the economy. 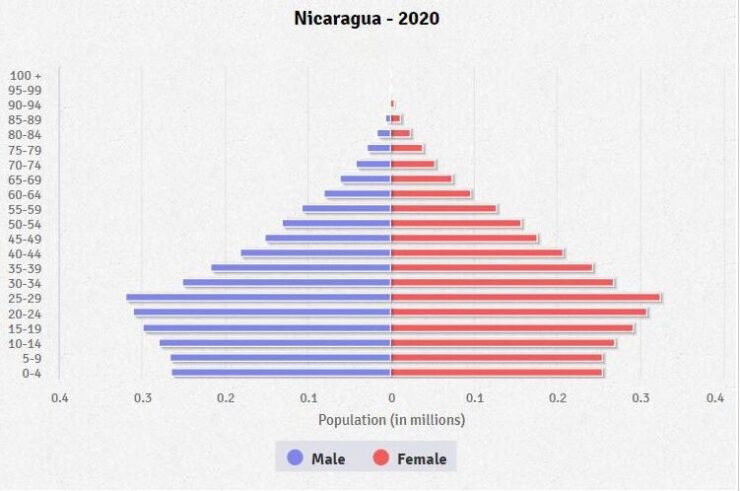 A people of “mestizos”

The majority of Nicaragua’s residents (69%) are descended from the indigenous people who lived in the country before the Spanish conquest. However, they have adapted to the colonial culture, often mixed with the Spanish immigrants and now speak Nicaraguan Spanish. That is why the term “mestizo”, meaning people of mixed Indian-European descent, has prevailed for them. Only 5% of the population remains who live on the Atlantic coast and are considered “Indian” in the sense of their own culture and language. The proportion of the allegedly “white” population is given today with 17%, the proportion of Afro-Americans with 9%. These figures come from the “IndexMundi” and should (like all statistics on the ethnic composition of the population) be treated with caution, because they mix biological and ethnic categorizations in a way that is difficult to control.

To this day, society is steeped in the Indian heritage. It can be seen in many places, particularly clearly in the communal traditions of many villages and the colonial communities of Monimbó (district of Masaya) and Subtiava (district of León). It lives in religiosity, in village festivals and in handicrafts. Nicaraguan Spanish contains up to 30% Native American words that relate primarily to everyday life, family relationships, and nature.

A hundred years ago, the census in Nicaragua, one of countries in Central America according to physicscat, counted around 50% “Indians”. However, this category disappeared in the first half of the 20th century, and since then all residents who do not see themselves as “whites” or “blacks” have been regarded as “mestizos”.

This reflects a change in self-image, because the national culture has since defined itself as a mixed culture of Indian and Spanish traditions. This harmonization of completely opposite elements follows the example of Mexico and covers up many contradictions. It ignores the racism of whites and the reality of the oppression of the Indians, which is slowly emerging again today; so did the 2005 census. For the first time more than 100,000 people on the Pacific side of the country are known by their ethnic affiliation as Subtiava, Chorotega, Cacopera etc. In the self-image as a people of the mestizo one can also see the advantage that Nicaragua was spared the escalation of ethnic differences, and thus also the violence and extreme racism that characterizes, for example, the ethnically divided society in Guatemala.