Since the police and army in Nicaragua were rebuilt after the 1979 revolution and trained in social responsibility, the number of state violations of individual rights was for a long time much lower than in other Central American countries such as Guatemala, where arbitrary arrests and death threats by death squads were pending are the order of the day. But already in the 2017/18 annual report Amnesty International reported threats and intimidation against human rights defenders and civil society organizations. The land conflicts in the north of the Mosquitia and the preparation of the canal construction led to the violation of the rights of indigenous and Afro-American groups. Concern was also raised that gender-based violence against women remained unpunished and that abortion continued to be criminalized in all cases. An overview of developments in recent years shows that human rights violations have steadily increased. A detailed documentation of the attacks by state and government and the situation of rights in the areas of education, work, health, etc. can be found in the annual report 2016/17 the prestigious organization Centro Nicaragüense de Derechos Humanos. On May 16, 2017, CENIDH published a political statement on the first 100 days of President Ortega’s new term in office. Above all, it criticizes the violation of democratic rights.

The escalation of violent protests against the canal construction was a new development since December 2014 in the south-east of the country and was accompanied by arbitrary arrests and restrictions on the freedom of demonstration and information by the police. Spanish journalists were arrested and a Belgian photographer was even expelled from the country. An alliance of environmental and human rights groups brought all complaints in the form of a petition to the Inter-American Human Rights Commission (CIDH) on March 16, 2015. Spokesmen for Rama and Kriol communities in the Costa Caribe Sur region pointed out in 2016 that 52% of the canal route will run through their territory and that the consultations required by law have not taken place.

In the current protest movement since April 18, 2018, the violent attacks by the state and serious human rights violations have reached a level that no one has thought possible since the civil war against the Somoza regime. Amnesty International’s report, “Instilling Terror: From Lethal Force to Persecution in Nicaragua”documents the widespread use of armed groups in the service of the government, excessive use of force, extrajudicial executions, torture and arbitrary arrests. For the period April-September 2018, 322 deaths were reported, the vast majority of them victims of state and para-state violence. That figure also includes 22 police fatalities. One of the most important demands of the broad “Civil Alliance for Democracy and Justice” within the framework of the “National Dialogue” was the establishment of an independent, international truth commission to investigate state attacks. The government, however, upheld its version that its measures were the legitimate defense against an ecclesiastically and internationally controlled “attempted coup” and has refused to date any serious investigation into human rights violations. The CIDH (Mechanism of the OAS) was temporarily allowed to start the reconnaissance, but was hindered in its work and expelled from the country for good in December 2018. Since the barricades in Nicaragua have been cleared and open street demonstrations have hardly been possible since autumn 2018, the death toll has not increased significantly.

The CIDH had to declare again in February 2019 that the serious human rights violations continue. Arbitrary arrests continue and government repression has focused on restricting freedom of the press and expression (so called “press and media”) and on measures against human rights organizations in the country. The recognized and leading human rights center CENIDH, which has been supported by Germany for many years, was stripped of its legal status on December 11, 2018. This measure also affected eight other NGOs that are uncomfortable for the government. The CIDH saw it as “the violent dissolution of a civil society organization” and “one of the sharpest restrictions on the right to free association.”a report. Despite negotiations between the government and the opposition and the release of numerous political prisoners, arbitrary arrests, extrajudicial executions and murders of women continued in 2019. Of particular concern is that numerous demonstrative murders of farmers in the north of the country have become known. The background seems to have something to do with the previous war against the Contra, but has not yet been clarified. In June 2020 the annual report 2018-2019 of CENIDH was published, in which the repression measures and human rights violations of both years are documented.

The fate of political prisoners is of particular importance. According to the “Alianza Cívica” opposition alliance, their number had risen to 767 by the beginning of February 2019. These prisoners included many well-known intellectuals, journalists, student leaders and representatives of popular organizations. Many of these prisoners were ill-treated and inadequately cared for. Although the government claims that those arrested are common criminals who need to be tried in court, the CIDH has found in many individual cases that the political prisoners are exposed to special treatment. The above figure of 767 also includes 149 “disappeared” people whose whereabouts and fate have not yet been clarified by the authorities. During the negotiations between the government and the opposition on March 29, 2019, the “release of all political prisoners” was agreed. After that many hundreds of prisoners were including well-known opposition leaders and even convicted critics of the regime released. However, this is actually only about exemption from detention, because the investigations and pending legal proceedings are not settled in all cases, but only suspended. Since new arrests were constantly being made at the same time, the situation was confusing for a while. Since the government did not actually release all of the prisoners within the agreed deadline (until June 29), the Alianza Civica withdrew from the negotiations and the government has since ruled out any resumption of talks. According to the CIDH, 120 political prisoners are still in prison. In the same report, the CIDH notes that more than 400 health care workers have been laid off for political reasons and that 144 students have been evicted from public universities for allegedly participating in protests against the Ortega government. At the end of 2019, 91 political prisoners were allowed to leave the prison. This exemption did not apply to 63 other prison inmates; they had to stay behind the dungeon walls. On May 13, 2020, the government granted 2,815 convicted criminals an amnesty to mark the upcoming Mother’s Day. The 83 political prisoners who were still in custody in May were excluded from this amnesty. According to their families, 38 of them show symptoms of corona disease and urgently need to be released for health reasons.

When assessing the transparency and cleanliness of government action, Nicaragua, one of countries in Central America according to ezinereligion, is generally given very poor marks. The country report by Transparency International shows that Nicaragua achieved only 22 (out of a possible 100) points in the CPI ranking for 2019 and is ranked 161st out of 180 countries. It has once again worsened its position compared to 2018, when it was still in 156th place. In a regional comparison, Nicaragua (after Venezuela and Haiti) is one of the three countries in Latin America where corruption has reached the greatest extent. The Corruption in this country is considered “extreme” and “an obstacle to development”. In the opinion of the FUNIDES Foundation, the figures cited reflect both the corrupt conduct of the state administration and the weakness of the mechanisms that are supposed to prevent corruption. 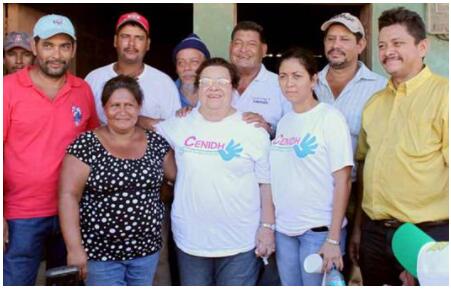