Nicaragua lies on the isthmus between North and South America and has therefore been a meeting place for many species of plants and animals from the north and the south since ancient times. The biodiversity in the country is very high, even compared to other Central American countries. However, the ecological and social changes in Nicaragua have brought about a dramatic deterioration in the environmental situation. Only 26% of the country is formally designated as forest. According to figures from MARENA and Centro Humboldt, the forest area has already decreased from 7.23 million hectares (1980) to 2.20 million hectares (2011). After the advancement of the settlement boundary from the Pacific side made the forest in the central mountainous region disappear, the overexploitation of the rainforest in the Atlantic region continues.

The social scientist Selmira Flores from the Universidad Centroamericana in Managua has the fundamental environmental problem recently formulated as follows: “The neglect of the environment in Nicaragua is a historical problem for which all governments, entrepreneurs as a whole and also the population are responsible. The problem has its roots in the prevailing economic model, which is based on a production logic of accumulation, irrationally exploits the country’s abundant natural resources and creates social inequality. We have been using this extractivist and socially discriminatory model for a long time and have unfortunately become used to understanding it as ‘development’. The result is an environmental crisis, which we already have to regard as an environmental emergency. ” Mrs Flores notes that the development of modern companies in agricultural export was always conceived with monoculture and mechanization together. These ideas are also rooted in the population, because the belief is widespread that the solution to our social and economic problems can only come from major projects. When looking at the Ortega government’s economic policies, it should be added to these observations that its major projects, such as the León oil refinery or the Interocean Canal, met with widespread support before their miserable failure became inevitable. But “major projects” also include a large number of concessions in mining, tourism, the fishing sector, agro-export, maquila production, etc., which are supposedly “successful” and have shaped the production structure of the country. According to this scholar, the political opposition to the Ortega government cannot limit itself to calling for legal and institutional reforms. If the extraivist development model and the promotion of large projects are not abolished, the reality of the country and the environmental emergency will not change at all.

The “Reserva de la Biosfera Bosawás” on the Atlantic coast is the largest nature reserve in Central America with 20,000 km². But here, too, the destruction of forests and the illegal exploitation of precious woods are advancing rapidly. The corruption of the military and civil authorities is denounced in vain by the villages of the Mayangna Indians. For years, the company “ALBA Forestal” (part of the Albanisa company, which the government operates with the Venezuelan aid funds) has been suspected of being involved in the lucrative wood robbery. In mid-2016, environmental experts painted a bleak picture of the situation in Bosawás at a conference at the Catholic University of UCA. According to this, 30% of the forest in the core zone and 70% in the surrounding area has already been destroyed. The well-known geographer Jaime Incer estimated that “Bosawás will be completely gone in 15 years, if not sooner”, and with it the unique ecosystem that is so important for Central America. In May 2019, Amaru Ruiz, chairman of the “Fundación del Río”, raised new, serious allegations against ALBA Forestal. The company (since 2014 under its new name N&H Wood Products) has used the clean-up work after Hurricane Felix 2007 to get no less than 73,855 container loads of wood from the forests of the Atlantic coast. They have the monopoly of the timber trade in Nicaragua and continue to play an active role in deforestation in the country. The NGO Fundación del Río was stripped of its legal recognition in December 2018, and Amaru Ruiz is now in exile in Costa Rica.

The country’s natural abundance of water does not prevent the seasonal scarcity of water for humans and agriculture. The pollution of surface waters can hardly be stopped, and now even the alarm must be sounded for the Great Lake Nicaragua, one of countries in Central America according to militarynous. The government’s plans to build the Great Canal have alarmed environmentalists. You say that the worst consequences for Lake Nicaragua and the ecosystems of the Atlantic coast are to be feared.

Nicaragua is an agricultural country and society is shaped by a tradition of farming and livestock farming. However, the FAO map shown below shows that almost the entire agricultural area is affected by a “serious deterioration” in soil quality. This alarming development can be traced back to the intensification of export production, deforestation and widespread overexploitation. It is to be feared that the situation will worsen as a result of the CAFTA free trade agreement, because export pressure will increase and the smallholder, more environmentally friendly cultivation of basic foodstuffs will come under further pressure from foreign competition.

Politicians in Nicaragua are officially committed to the goal of sustainability, and an area of 27.7% of the country is designated as a nature reserve (2016). But the facts speak a different language. In 1990, 37.5% of the national territory was still covered by forest. This percentage fell to 25.9% by 2016 and has remained at this level since then (official figures). The environmental expert Victor Campos from Centro Humboldt (Managua) criticized in the television program “Esta Noche” (8/8/2017)that deforestation in Nicaragua is progressing at a rate of 6% per year and that efforts to save the Bosawás primeval forest are completely inadequate. The expert Salvador Montenegro also pointed out the increasing scarcity of water in the country. The amount of water that is mathematically available per capita has decreased by 30% over the past 22 years due to environmental degradation and climate change. In the broadcast mentioned, Victor Campos also criticized the fact that the government of Nicaragua had not signed the Paris Agreement on Climate Change. She has isolated herself diplomatically and is in the strange company of critics of the agreement such as Syria’s head of state Assad and US President Donald Trump. But there has been a correction here. On 23.Paris Climate Agreement. In February 2018 Nicaragua received a seat on the board of the global Green Climate Fund (GFC). The respected environmental organizations Grupo Cocibolca and Centro Humboldt protested in an open letter to the GCF against the appointment of Paul Oquist (personal advisor to President Ortega) to this post. They pointed to Oquist’s participation in serious human rights violations and his responsibility for the environmentally destructive canal project. They also noted that the government of Nicaragua has not put forward a plan to combat climate change.

Nothing remains of the momentum with which the “Mesoamerican Biological Corridor” was founded in 1997. The destruction of the environment continues in the fantastically beautiful “Reserva Indio Maíz” nature reserve on the Río San Juan, a central section of the corridor, and there is a dramatic struggle over the forms of use. The environment ministry MARENA mentioned in its report for 2017 that the core zone of the “Reserva Indio Maiz” was from a state road construction project is threatened. At this point it should be remembered that the protest movement of April 2018 started from a mysterious fire in the “Reserva del Indio Maíz”. The government’s handling of the canal project and the well-known allegations against the state company “Alba Forestal” have contributed to the rapid loss of confidence in the Ortega government in large parts of the population. 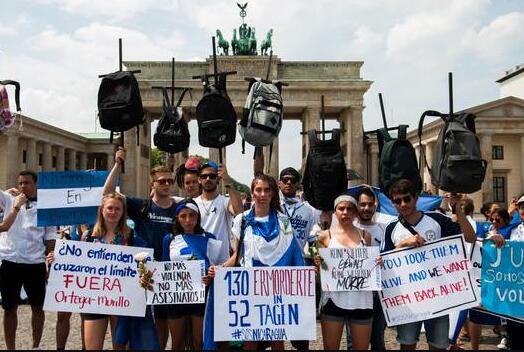