The Nicaraguan school system is divided into the pre-school (Preescolar), the six-year elementary school (Primaria) and a five-year secondary level (Secundaria); After 11 years of school you can take the Abitur examination (Bachillerato). A large part of the schools, especially in the secondary level, are private schools for which school fees have to be paid; they are attended by around 19% of the students. Renowned private high schools (Colegios) include the Instituto Pedagógico La Salle, the Colegio Centroamérica, the German School and the Colegio Calasanz. The Montessori Kindergarten in Managua is an example of pedagogically committed childcare.

In the higher education sector, two major institutions are particularly important: the state “Universidad Autónoma de Nicaragua” (UNAN) and the Catholic “Universidad Centroamericana” (UCA). The Technical University in Managua (UPOLI) should also be mentioned. There are two universities on the Atlantic coast: The “Bluefields Indian and Caribbean University” (BICU) in the south (founded in 1991) and the “Universidad de las Regiones Autónomas de la Costa Caribe de Nicaragua” URACCAN based in Bilwi (Puerto Cabezas), Bluefields, Las Minas and Nueva Guinea, founded in 1995. In addition, after the liberalization of higher education legislation in 1990, around 50 private universities have been established throughout the country, some of which can be described as poor academic standards.

The Nicaraguan Constitution provides that 6% of the state budget is reserved for university education. For many years there have been regular and sharp disputes about the financing and subsidization of universities. It is therefore not surprising that after the militant role of the students in the protest movement of 2018, this area is also being shot at. In December 2018, the government-loyal student association UNEN demanded that the Catholic University UCA should remove its legal share of state funding. The UCA students started the protests in April 2018. In fact, the UCA’s government subsidy for 2019 was cut by 26.7%, while the other universities only cut 0.2 to 1%. 4% had to accept. Father José Idiáquez, Rector of the UCA, explained the Press said it was a punishment for UCA educating students to be critical. The National Council of Universities CNU, which decides on the distribution of the funds, is headed by Ramona Rodríguez MA, the FSLN-loyal Rector of UNAN. She justified the cuts by saying that the destruction last year in her own university and in the UPOLI technical university was so great that reconstruction was a priority there.

The series “The most dangerous way to school in the world” produced a report in Nicaragua (ARTE 2015). The 15-minute video was shot on the Atlantic coast and shows impressively the difficult conditions under which many children go to school in Nicaragua, one of countries in Central America according to eningbo. In addition, the Nicaraguan education system is extremely underperforming and underfunded. The school attendance of all Nicaraguans limited on average still six years of elementary school. This number barely reaches the lower end of international standards. The independent research and action center CIASES recently pointed to an “enormous backlog” in the education system and noted, among other things, that the students from Nicaragua regularly end up at the bottom of the UNESCO performance tests, in which the country has participated together with the other countries of Latin America since 2006. While the results in reading comprehension have improved somewhat, knowledge of mathematics and science is still completely inadequate. The teachers have far too little social standing and poor training. According to the Ministry of Education, 24% of teachers in primary and secondary schools are also formally insufficiently qualified. Teacher salaries are the worst in Central America. A primary school teacher receives a salary from approximately US $ 250 / month. If she goes to San José / Costa Rica, with a little luck she can earn more as a domestic help.

When the Ortega government took office in 2007, it announced a major education offensive and took important measures: it abolished school autonomy and made public schools free again. In 2011, 93.2% of the children were again enrolled in a primary school and 45.8% in a secondary school. The high dropout rates in primary and secondary schools had been reduced to 3.3% and 9.8% respectively by 2016, according to official figures. In a Central American comparison, these values are still among the worst. The government has also made it its goal to eradicate illiteracy as quickly as possible. The Cuban method “Yo, sí puedo” is used for this. The literacy centers were set up in the homes of the volunteers who help the study groups understand the instructional videos. This campaign seems to be successful because illiteracy has decreased. The CIA’s World Factbook puts the number of literate adults (15 years and older) at 82.8%, which corresponds to an illiteracy rate of 17.2%.

The successes of the new education policy have to be described as modest so far. In many places, the new conditions have led to a run on the too small and poorly equipped school buildings. Just improving staff and buildings would require enormous investments that have not been made since 2007. The latest statistics from the central bank probably show that public funding for education was increased from 2011 (US $ 367 million) to 2017 (US $ 604 million). The expenditure on the education system did not exceed 2.6% of GDP in 2007. This proportion was increased to 3.37% by 2016, but remains miles below the target of 6% that the 2030 Agenda aimed at for a comprehensive development of popular education. The country report of the IMF 2016 speaks, for example, of “serious failures” in school education. In a regional comparison, the CIASES center shows that the state in Costa Rica spends an average of US $ 700 per person / year on education, while Honduras and Guatemala spend US $ 100 and Nicaragua with no more than US $ 70 on the last Place lands. 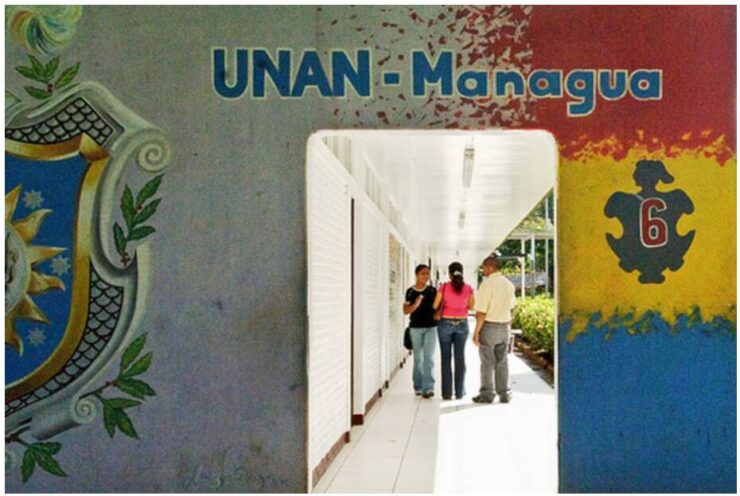