Daniel Ortega Saavedra (born 1945) is the President of Nicaragua and the chairman of the Sandinista party FSLN. After his presidency during the revolutionary period (1985-1991) he was able to be re-elected to office in 2006 with only 38% of the vote. On November 6, 2011, he was re-elected by a large majority. After the re-election ban was removed from the constitution and the opposition largely eliminated, Ortega actually got himself elected for another five years in November 2016.

Ortega invokes a “new” and “united” Nicaragua again and again. In his speeches he presents his administration as the second attempt at revolution and emphasizes that Nicaragua should become strong and independent of imperialism and that the fight against poverty and the taming of the Capitalism is its most important goals. The political orientation and propaganda of the presidential couple are detailed in the news portal EL19DIGITAL to read. The President still invokes “Sandinism”, but the political statements of the revolution of 1979 have long since turned into a vague “revolution of love” that is supposed to be “Christian, socialist and solidary” at the same time. The religiously charged language is well received by many Nicaraguans, but it hides the real problems of the country like a wall of smoke.

In terms of foreign policy, he maintains close ties with Venezuela and Cuba. For a long time he was able to avoid more serious conflicts with the USA and cultivated an excellent relationship with entrepreneurs in his country. As one of countries in Central America according to computerannals, Nicaragua has so far met its international obligations and the requirements of the International Monetary Fund without any problems. The international donor community, which in 2008 still vehemently protested against the manipulation of the local elections, had long since come to terms with Ortega’s re-elections. All of this was in effect until the nationwide protests erupted in April 2018. Since then, the president’s power has been controversial and many of the requirements for his strong position have slipped.

Ortega celebrates his personal power in a way that identifies him as a classic “caudillo”. He was re-elected in November 2011, although the re-election ban was still in the constitution at the time. His wife Rosario Murillo has a real share in power. Formally, for a long time she was only chair of the Commission for Communication and Civil Rights (Consejo de comunicación y ciudadanía) and thus responsible for public relations, but even then she was demonstrably at the center of all relevant political issues and personnel decisions. In the elections in November 2016, she ran as a candidate for the post of Vice President and, as expected, was elected. Ortega, whose health is seriously damaged, probably already wanted to provide for a successor within the family. 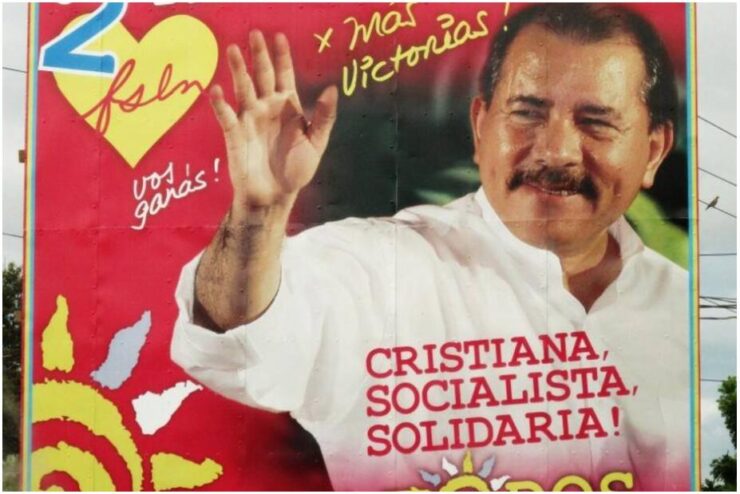 Since taking up his second term in office, Ortega left no doubt that he wanted to stick to his previous course. His full power had grown, because he now had a two-thirds majority in parliament and could even change the constitution at will. He offered the opposition a “dialogue”, but there was no question of substantial offers or a new political start. Ortega did not even reform the discredited electoral authority CSE, which had covered its march through in the elections. In reality a completely new situation had arisen: The Nicaraguan two-party system, which had been revived by the “Pacto Político” with Alemán in 1998, no longer existed. The last building block for this was the almost complete takeover of local politics (see below).

Ortega’s previous strength was based primarily on the positive economic development. The economy had grown by around 4-5% annually since 2011, and foreign direct investment reached record levels. The value of national exports had more than doubled since 2006. Venezuelan aid was already falling sharply then, but no one could deny that the country had made tremendous economic progress since 2006. The canal project also raised hopes for a better future.

Local elections were held on November 4, 2012. The FSLN was able to book another landslide victory and now controlled 134 of a total of 153 cities and communities in the country. Only 13 mayor posts remained for the opposition candidates. Independent election observers reported incidents, irregularities and discrimination against the opposition. With the regional elections on the Atlantic coast on March 2, 2014, the FSLN secured a majority in both regional councils (RACCN and RACCS). The profits went at the expense of the Indian organization Yatama in the north and the defeated Liberals (PLC) in the south. Shortly afterwards there was a final break with the FSLN with whom Yatama had worked for many years. The ruling party FSLN secured a dominant position on all political levels in the elections in 2011, 2012 and 2014 with all available means and pressure.

In November 2013, the Ortega government presented the project of a comprehensive constitutional reform in front. The draft, which was passed soon after, provided for the amendment or deletion of 39 of the previously 200 articles and wrote the authoritarian structures that Ortega had built up since 2007 into the Nicaraguan constitution. As expected, the ban on re-election of the president has been completely removed. If a candidate only receives a relative majority of the votes, there will be no more runoff elections in future. The power of the president is strengthened in many areas (e.g. extension of the term of office of elected state officials by simple decree), and corporate state elements are introduced. This means a further weakening of the position of parliament and political parties. Active military personnel can take on administrative tasks in the future. That was previously forbidden to ensure the political neutrality of the military. The lifting of the ban is justified with a “strengthening of national security”. The opposition fears that this will be a step towards political co-opting of the army. Without any major debate, the reform was passed in parliament on January 29, 2014 in the second reading and thus came into force.