The topic of the global corona crisis reached Nicaragua with a delay, but then hit all the more violently. In the second week of March, when the Central American neighboring states had already taken massive precautionary measures and the first deaths were to be lamented, the alarm had not yet reached the government in Managua. The Vice President reacted in her very own way: She called for a public rally under the motto “Love in times of COVID-19”. On March 14th, the people were supposed to prepare en masse to “protect themselves together”. The execution of this march sparked a wave of indignation. At that time, the magazine “Confidencial”been leaked. It said that in Nicaragua in the first six months of the pandemic, 32,500 affected people and over 800 deaths could be expected. Leading doctors expressed their dismay that, contrary to all medical common sense, people are being exposed to an additional risk of infection instead of taking consistent measures against the spread of the virus. The lack of information also brings with it the risk of panic.

On April 15, President Ortega turned in a televised address to the nation after not being seen in public at all for over a month. It made it clear that the government was going a separate way and did not want to take the measures that had long been taken for granted in most countries in the world to combat the spread of the virus. On May 25, the government presented a “white paper” on the pandemic. In this she insisted on her “particular strategy” based on a “balance” between health and economic issues and sided with Sweden. To this day there are no restrictions on public life, no school and university closings, no enforcement of distance rules and prevention of the known routes of infection,

The government’s unwillingness to face danger is not only due to Rosario Murillo’s esoteric worldview. It has the specific background that the country has been in a serious economic crisis since 2018 and that the dramatic state of state finances hardly allows the costs of the necessary equipment for the health system and the consequences of a general shutdown of social and economic life to be borne. Last spring, for example, there was a revival offensive of the depressed tourism planned. That is why in Corinto the passengers of a cruise ship were greeted by children with flowers when they went ashore, while the ports around the world were already closed. The government even tried to profit directly from the border closings of neighboring states. A statement said that every guest was welcome in Nicaragua, one of countries in Central America according to estatelearning; Travelers would not have to expect quarantine, even if they came from a country with confirmed corona infections. Fear of the economic consequences of the global pandemic is now very widespread, as the country is now experiencing its third year of dramatic depression.

According to the Ministry of Health, there are 5,838 infections with the corona virus and 161 deaths in Nicaragua (as of December 2, 2020). Although it is undisputed that the disease reached the country with a significant delay compared to North and South America, the official data are implausible and can only be explained by the fact that little testing is carried out and the recording of deaths is obscured. Initiatives have been formed that independently document the spread of the disease in order to enable a realistic assessment of the situation. The “Observatorio Ciudadano COVID-19″recorded a total of 11,357 infections and 2,805 deaths as of November 25. These numbers are made up of the officially confirmed cases and the suspected cases reported to the Observatorio and verified by independent medical professionals.

The discrepancy between the official figures and reality inevitably leads to dramatic uncertainty among the population. Protective masks are scarce and expensive. Public life has been reduced for weeks because many people are afraid and stay at home as far as they can afford it. Wild speculation is growing, in particular rumors are spreading about the secret burial of corona dead at night. Many parents do not send their children to school for fear of infection. Private schools and universities have ceased teaching and the small group of privileged students with Internet access has largely switched to digital learning. In September, both the Ministry and the “Observatorio Ciudadano” recorded that the increase in the number of infections and deaths slowed. The desire for normalization seemed to be gaining the upper hand, and visits to shopping malls and social hangouts increased again. However, many medical professionals were of the opinion that the explosive increase in infections would come back, just as it then happened. Nicaragua gives the image of a troubled country in which the economic consequences of the crisis, especially the increase in unemployment and underemployment, dominate everyday life. In addition, price increases for staple foods are imminent. Molecular biologist Jorge Huete is Vice Rector of the Universidad Centroamericana and also President of the National Academy of Sciences (Academia de Ciencias de Nicaragua). He is editor of the recently published book “Covid-19, el caso de Nicaragua. Aportes para enfrentar la Pandemia “. In this book and other public statements, he criticizes the government in an unusually harsh manner. Among other things, he writes:” The corona virus has exposed the tragic reality that we are experiencing today in Nicaragua. We have before us a government that has an anachronistic and unscientific view of the world, one that is oriented towards the plundering of nature, and that has an opportunistic and economically oriented logic in the face of a problem it must solve because it affects all of society. This government is only acting in its own interest, without taking the fate of the nation seriously. ” 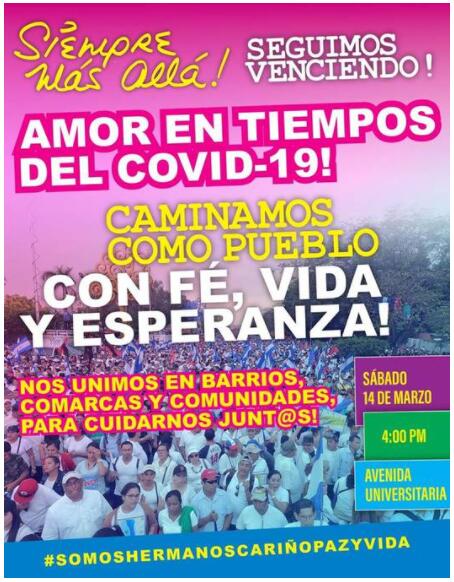