Nicaragua traditionally sees itself in a key geographic position. In fact, however, it lost the canal to Panama in the 20th century and kept falling behind economically. The controversial mega-canal project of 2013 was supposed to open new ways out of poverty, but it won’t happen at all.

According to areacodesexplorer, the capital of Nicaragua is Managua. Those who come to Managua for the first time quickly lose their bearings. Managua is perhaps the only capital in the world that does not have a center. The city has never had a beautiful development like the colonial cities of Granada and León. The urban flair that developed at the beginning of the 20th century was lost in the great earthquake in 1972. Since the center was never properly rebuilt, it can still happen to the visitor today that he stands on rubble in the middle of the city and sees the cows graze between improvised dwellings. In the last twenty years a new center has formed on Carretera Masaya, but this is a commercial ghost town with shopping malls and luxury restaurants that has little to do with the social reality of the country. The question”Where is the soul of the city?” is always set anew. The Nicaragua portal has beautiful pictures and descriptions.

A city map is hard to come by, and it doesn’t really help. The streets actually have different names than those on the map, or they don’t have any. Addresses have to be looked for using an adventurous orientation system, and house numbers are unknown. For example, the Ministry of Foreign Affairs has the address: del cine González 1 cuadra al Sur. This means that when you are at the “González” cinema, you have to move 100 m (one block) south to get there. But where is the González cinema? You know that, and if not, you can ask yourself. And where is the south? This is where the roads leading away from the lake (= north) lead… After a few adventures and nice encounters that you had while looking for difficult addresses, you can still find your way around.

In Managua there are around 1000 urban buses, but it is hard to believe that there have been no maps with which users could follow the course of the bus routes. A working group of the global OpenStreetMaps project has therefore set to work and founded the “MapaNica” project. The goal is to create a free bus timetable for Managua that is accessible to all residents and visitors. The first results are available.

Cyclists have had a dangerous life in the city up to now, because there is no space for them on the overcrowded streets and drivers and trucks are far too little considerate. With the extension of the major thoroughfare “Pista Juan Pablo II” (between the Rotonda Rubén Darío and km 7), separate cycle paths are now being planned for the first time. This is linked to the hope that the importance of the bicycle for urban traffic will be discussed in the future and that it will gain more recognition.

The city is located on Lake Managua, which is unfortunately heavily polluted. The distances are huge, and the city is criss-crossed by endless motorways, on the edge of which the colorful city life takes place. Poor and rich neighborhoods suddenly alternate. The noise of the city and the constant movement of people and cars let you quickly fall into a kind of trance. Managua is certainly not a charming colonial city or a cultural metropolis, and tourism is only gradually opening up to visitors. And yet this city is lovable and has its good points. The friendliness and the humor of the residents always help over the problems of everyday life. Air pollution is low (compared to other large cities in Latin America),

The large thoroughfares and roundabout islands (“rotondas”) of the city center have recently been lined with so-called “trees of life”. These trees, whose shape is allegedly based on a design by Gustav Klimt, are supposed to symbolize “life” according to the president’s wife. In reality, however, they are each 7 tonne steel structures that are 21 m high and are lit by thousands of light bulbs at night. Around 140 of these monumental trees have been erected to date. According to a newspaper report each tree cost US $ 25,000, which combined costs of US $ 3.5 million. caused. In the current protest movement since April 2018, these trees, which are called “chayopalos” (after the vice president’s nickname), have become the target of popular anger. Dozens were sawed off and destroyed.

Nobody who lives in Nicaragua or comes to visit Managua can get past Managua. Greater Managua has 1-2 million residents, and all other cities are small. Everything that has national and international significance gathers in Managua: the authorities and ministries, government institutions, the offices of all important NGOs and international organizations, the editorial offices of the daily newspapers, the major universities, the television companies, the embassies, the banks, etc. 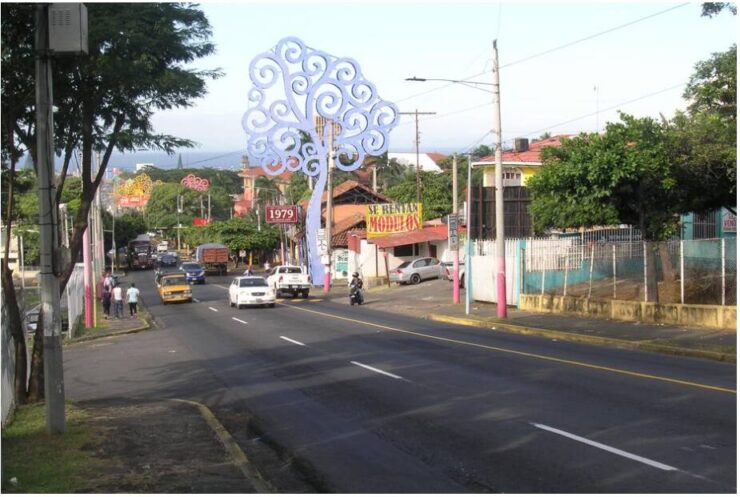