The most archaic of the pre-colonial music traditions is the song tradition among the Indians in the wild, where instruments have not been known. Otherwise, flutes and rhythm instruments are common, while string instruments were unknown before colonization. The Incas brought with them antara (pan flute), and from the 16th century European instruments such as guitar, violin, harp, organ and scalpel played a dominant role. The Mestis traditions include folk dances such as chacarera, gato and zamba, with Native American elements in the dance, while musical styles point more towards Andalucía.

The tango has African-American roots (West Indian habanera). It emerged in the 19th century among poor, criminals and prostitutes in Buenos Aires and quickly spread to the middle class. The bandone player and composer Astor Piazzolla and others have developed the tango into a multifaceted art form, and helped to make it internationally acclaimed.

Spanish church music was established in the 16th century and exerted a strong influence on all groups of people. Particular art music grew especially in the 19th century, including guest appearances by Italian opera companies. The basis for a national art music was laid in the 1890s, with the establishment of a number of institutions that teach music. The Teatro Colón Opera House was opened in 1908.

The first 1900s generation of composers (Pascual de Rogatis, Floro M. Ugarte and others) was nationalist and strongly influenced by folk music. A more internationally oriented direction came with J. Aguirre and CL Buchardo and was followed by a number of composers (JM Catro, G. Gilardo and others). Both of these main directions were united in the El Grupo Renovación (1929–36), which became crucial for the further development of art music. In the second half of the 20th century, Alberto Ginastera, among others, stood in the forefront, his Cantata para América Mágica being considered a highlight of Argentine music. Among the others should be mentioned Mauricio Kagel, Michael Gielen and Mario Davidovsky.

The tango, especially represented by Astor Piazolla, has had a significant impact on the Argentine jazz scene from the 60s onwards. One of the most important performers is the band player Dino Saluzzi, who has gained an international audience with his tango-infused jazz expression. He has a number of releases on the acclaimed German record label ECM, and has collaborated with several key jazz musicians such as Charlie Haden, Tomasz Stanko, Palle Danielsson, and Jon Christensen.

Argentine tenor saxophonist Gato Barbieri became a key performer on the international jazz scene from the 1960s onwards with his modern and expressive expression. Known for his collaboration with trumpeter Don Cherry on the album Complete Communion from 1966, and projects with Carla Bley and Charlie Haden’s Liberation Music Orchestra. 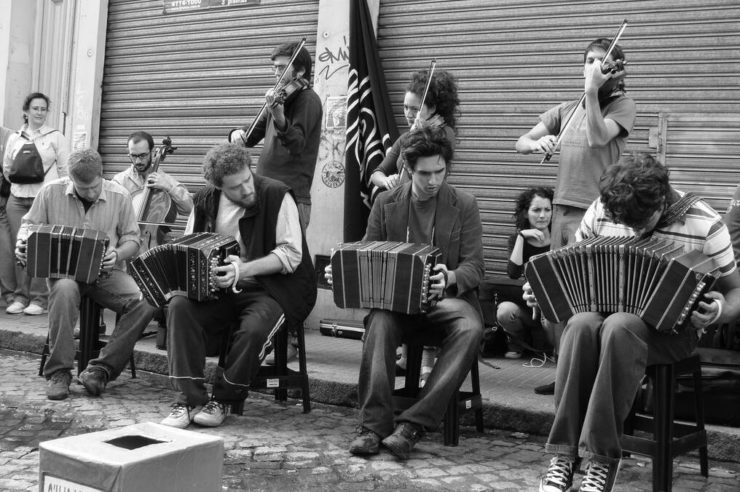