Mexican cuisine developed from the cuisine of ancient Indian cultures – the Maya, Zapotec, Aztec and many others. Even with the oldest of these cultures, corn, beans and pumpkins were staple foods. They were grown together in the Milpa. You can still find all three in Mexican cuisine today.

For example, tortillas are baked from corn flour. Unlike the Spanish tortillas, which are called an omelette, these are thin flat cakes. They can be eaten as a side dish or filled and rolled up. If you eat it out of your hand, it’s a taco.

Filled and served with sauce, the tortillas are called enchiladas. If you fold the tortilla over once, put cheese in between and then bake the whole thing, you get a quesadilla. Other special fillings for quesadillas are pumpkin blossoms or huitlacoche. This is corn that has been attacked by a fungus and has therefore turned black. This then results in a very special taste.

Mexican cuisine was also influenced by the Spanish who came here in the 16th century and conquered the country. The Spanish influence is greater in northern Mexico than in the south. In northern Mexico, for example, tortillas are made from wheat flour. The Spaniards tried to import wheat here, but they did not succeed so well and did not succeed everywhere, because corn grows better here than grain. The Spaniards also brought pigs and cattle and introduced cattle breeding. Rice and dairy products, especially cheese, were also brought into the country by the Spaniards.

Breakfast in Mexico is rather small. Usually there is a roll or a sweet pastry. Street vendors offer tamales (see below). The main meal for most Mexicans is lunch, which is eaten around 3 p.m. It often consists of several courses. In the evening there is only one snack, for example a taco.

Many of the foods that we take for granted come from Mexico (and other countries in Central and South America). The Spanish conquerors brought them to Europe for the first time. This includes not only corn, but also avocado, cocoa, chili peppers, tomatoes, vanilla and peanuts. Of course, all tropical fruits that grow in Mexico are also eaten with pleasure, for example mangoes, bananas, pineapples and guavas.

Mole is a thick sauce in Mexico. You may have heard of guacamole before. It’s a mole made from mashed avocado. Mole Poblano is the national dish. This mole is made from chilli, spices and especially chocolate! This is then eaten with turkey or chicken.

In addition to tortillas in all their forms, there are also other dishes that people like to eat in Mexico. This includes Chiles en Nogada: These are chili peppers that are filled with minced meat and served with a walnut sauce and pomegranate seeds. The ingredients thus represent the colors of Mexico’s flag. That’s why people especially like to eat the Chiles en Nogada.

Tamales, on the other hand, are served in corn or banana leaves. The fillings consist of a corn dough on which meat or cheese is placed. You fold the sheet in and then steam it over a water bath.

The use of the prickly pear is certainly unusual for us. It’s called nopal in Mexican. The green leaves can be prepared as a vegetable or salad. Fortunately, the sharp thorns are already removed when you buy them… Cut into strips, they look more like green beans.

What do you drink in Mexico? Adults probably think first of tequila, the schnapps made from blue agave, or Mexican beer. But of course there are also non-alcoholic drinks, such as the Agua de Jamaica, which is tea made from hibiscus flowers. Lemonades and cola are also very popular. To get more information on Mexico and North America, check getzipcodes.

Healthier is a horchata, a drink that originally comes from Spain and is made there with almonds. It’s made in Mexico from rice that’s soaked, seasoned with cinnamon and then served cold. Atole, on the other hand, is made from corn and drunk hot, preferably for breakfast. You can find a recipe for atole here. 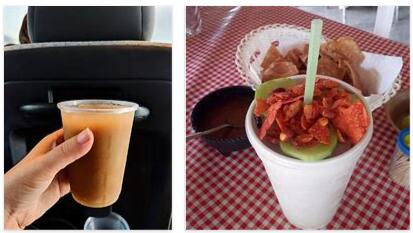 And what is Tex-Mex?

What is known as Tex-Mex cuisine doesn’t come from Mexico at all. It was created in the southwestern United States, particularly in Texas. These include, for example, nachos (tortilla chips, e.g. with cheese sauce) and chili con carne. Although they contain typical Mexican ingredients, they are not originally Mexican dishes.