At the northern end, on the border with Peru, lies Lake Titicaca, 3812 meters above sea level. The lake has drains through Desaguadero, which flows into the shallow Poopós lake. Further south, Altiplano becomes dry and golden, with large salt plains and the salt lake of Uyuni. East of the Cordillera Oriental, the Andes continue for another 300 kilometers with altitudes that vary between 1800 and 3000 meters above sea level. To the north, the eastern Cordillera falls steeply toward the lowlands, with deep, narrow valleys and gorges in an ecoregion called the Yungas.

The eastern lowlands are divided by the Chiquitosh Highlands into a large northern part and a significantly smaller area in the south and southeast. The Chiquitosh Highlands is a continuation of the Brazilian Highlands and reaches some places 1200 meters above sea level. The northern lowlands, which in the northeast extend into the Amazon basin, are drained by the rivers Madre de Dios, Beni, Mamoré and Guaporé. The southeastern lowland – Chaco – is a flat area with numerous shallow lakes and swamps. 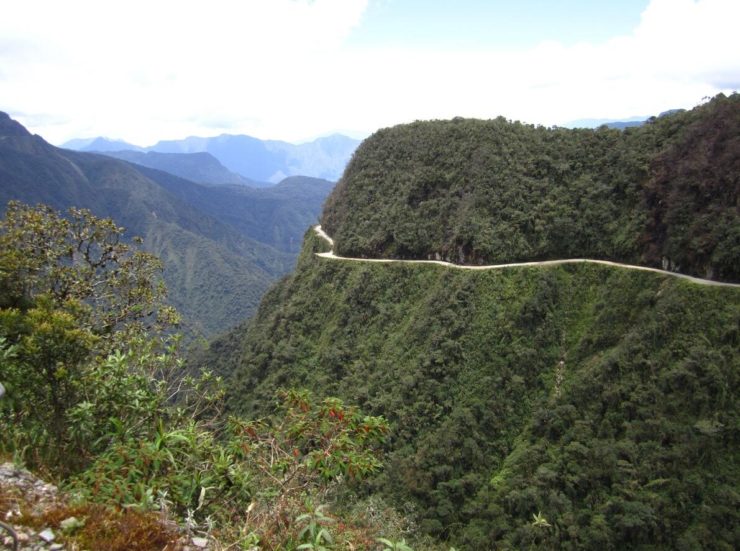 Bolivia is located in the tropical climate zone, but the temperatures are largely modified by the significant elevations. La Paz, which is 3600 meters above sea level, has mean values for July and November of 8 ° C and 11 ° C respectively. Cochabamba, located at an altitude of 2600 meters, has mean values ​​of 14 ° C and 20 ° C for the same months.

The daily temperature fluctuations are very large, and in the highlands frost can occur throughout the year. The rainfall is increasing from west to east in the highlands.

Annual rainfall in La Paz is 575 millimeters, most of which falls during the period December – March. The eastern lowlands have a humid tropical climate. To the north, the rainy season lasts from October to March, with annual rainfall of 1500–2300 millimeters. In the southern parts of the lowlands the length of the drying season increases significantly.

Bolivia has tropical South American fauna in the lowlands. Numerous guinea pig-like rodents, i.a. chinchillas or harem mice, pig caves and trumpet rats. Humpless camel animals are characteristic of the mountain regions: Vikunja and guanako (wild), llama and alpaca (livestock). Gourds and magellan fox live in the Andes, crab dogs and cormorants on the grasslands in the southeast. The bird fauna in the mountains include, among other things, goose, duck and duck condor.