Brazil is a republic in South America. The country borders ten of the twelve others on the South American continent: Uruguay, Argentina and Paraguay in the southwest, Bolivia and Peru in the west, Colombia in the northwest and Venezuela, Guyana, Suriname and French Guyana in the north. Brazil has a 7367 km long coastline towards the Atlantic Ocean.

Brazil is by far the largest land area in South America, and the fifth largest in the world. The country is a federation and consists of 27 states.

Brazil’s geography is diverse. It has rainforest ( Amazon ) in the north, grassy plains (pampas) in the south, large wetland areas ( Pantanal ) in the west, high plains in the central areas and a coastal strip of more than 7,000 kilometers.

People have lived in Brazil for more than 11,000 years. The indigenous people lived throughout the territory and are estimated to have between three and five million in the year 1500 when the Portuguese began to colonize the country. Brazil disbanded from Portugal in 1822.

The name Brazil comes from a tree used by the Portuguese colonists to obtain a red dye. The tree of the species Caesalpinia brasiliensis is called Portuguese pau brazil ( Brazil tree ).

Brazil has the largest economy in South America, and in 2018 the ninth largest economy in the world. The country is rich in natural resources and the main export goods are iron ore, crude oil, soy, sugar, meat and coffee. Despite social leveling off in the 2000s, Brazil remains one of the countries in the world with the greatest difference between poor and rich.

Norway and Brazil have more and more contact. For over 170 years, Norway has exported clipfish and imported coffee from Brazil. Today, the oil industry is the most important. Over 150 Norwegian companies are established in the country, mainly in the oil, gas and maritime industries. 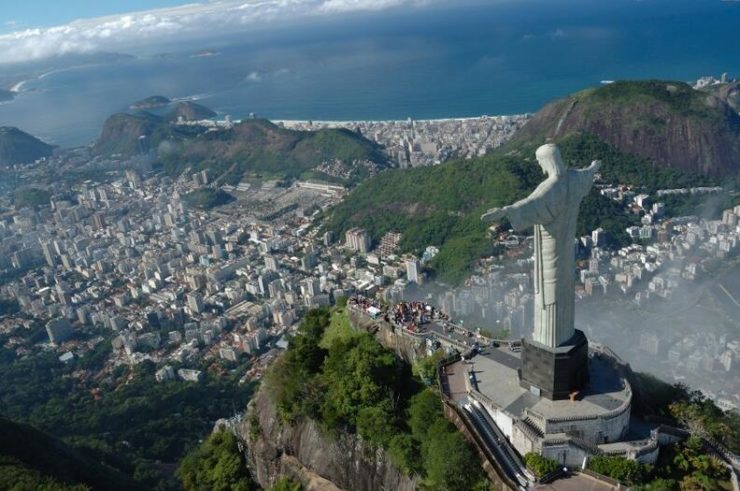 Rio de Janeiro’s landmark, the awesome statue of Christ the Redeemer that looks out over the city from Corcovado. The statue itself is 30 m high and stands on a seven meter high pedestal. The head alone is 3.7 meters high and weighs 35.6 tons, each hand weighs nine tons, and the distance between the two extremities of the arms is 23 meters. The entire statue weighs approx. 1000 tonnes. Inside the statue is a chapel that seats 150 people. The statue was created in Paris after drawings by the architect Heitor da Silva and transported to Rio. The hands and head were made by French sculptor Paul Landowsky. It was made in connection with the 100th anniversary of Brazil’s release from Portugal. The dedication took place on October 12, 1931, and was undertaken by Guglielmo Marconi.

Brazil is often divided into seven different types of habitat. By far the largest is the Amazon in the north, which alone accounts for half of the country’s area. The Amazon is dominated by rainforest and the large river system of the same name, and has an extremely rich animal and plant life.

To the south and east of the Amazon are the savannah areas called cerrado. They are characterized by drier climates, more open forests and shrub-covered plains. Just under a quarter of Brazil is covered by cerrado.

Along the coast, the Atlantic forest dominates the mata Atlantic. This type of forest can be reminiscent of the Amazon rainforest. The driest areas of Brazil are called caatinga and are inland in the northeast. Here the landscape is dominated by scrub and shrubs. To the west of the border with Paraguay lies the large wetland area of Pantanal.

All the way south, towards the border with Uruguay, we find the grassy plain under the name pampas. The seventh and last type of habitat is the coastal zone that lies along the entire long coast.

Due to the large area, the diversity of habitats and the extensive areas of rainforest, Brazil is probably the country in the world with the greatest biodiversity. The country has received a lot of negative attention due to deforestation in the Amazon and associated large emissions of greenhouse gases. In the 2000s, annual deforestation fell significantly before rising again from 2013. In 2017-2018 deforestation increased by 13.7 per cent to 790,000 hectares. 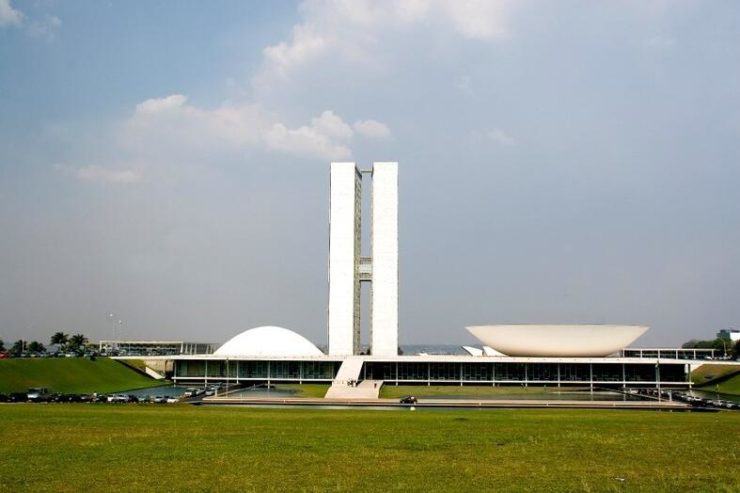 One of the many modernist public building complexes in Brazil that was built by Oscar Niemeyer in the late 1950s. The low building is the parliament building that houses the Legislative Assembly, the National Congress. The high block houses the president’s offices.

Most of Brazil’s population lives along the coast. This is also where we find the largest cities. The five city regions with the highest population figures in 2014 were São Paulo (20.9 million), Rio de Janeiro (12.1 million), Belo Horizonte (5.7 million), Porto Alegre (4.2 million) and Brazil (4, 1 million).

Brazil’s population is colorful. It consists of the indigenous peoples of the country, descendants of immigrants from Europe, the Middle East and Asia, as well as descendants of slaves from Africa. In Brazil’s census, people are asked to place themselves into one of five categories of “color / race”: white, colored ( pardo ), black, yellow (of Asian origin) and Native American. In the last major census of 2010, the result was as follows: white: 47.5 percent, color: 43.4 percent, black: 7.5 percent, yellow: 1.1 percent and Native American: 0.4 percent.

Although only 0.4 percent of Brazilians are indigenous people, there are more than 230 different indigenous groups in the country. They speak more than 180 languages ​​and thus represent the lion’s share of Brazil’s cultural diversity.

The average life expectancy in Brazil is 73 years, which places the country in the lower third of the world. On average, every woman has 1.8 children, which is lower than Norway and in the lower quarter of the world’s countries.

The dominant religion in Brazil is Catholicism. About 60 percent of Brazilians are Catholics, but the proportion has dropped rapidly in recent decades. The proportion of Protestants (evangelicos) has grown correspondingly rapidly, and is currently up to about 25 percent. There are also Afro-Brazilian religions candomblé and umbanda.

Brazil is a federation of 26 states plus the federal district that houses the capital city of Brasilia. Each state is further divided into municipalities. There are over 5000 municipalities in the country.

President Dilma Rousseff of the Labor Party (PT) was dismissed from the presidency on August 31, 2016 in his second term following a controversial national court case, and Michel Temer of the Party to the Brazilian Democratic Movement (PMDB) took over as president. In 2018, right-wing populist Jair Bolsonaro won the presidential election and was inaugurated on January 1, 2019. No fewer than 28 parties represented the Congress inaugurated in January 2015.

Brazil is the economic center of gravity in South America. The country accounts for just over half of the continent’s total gross domestic product, and on a global scale, Brazil’s economy is the ninth largest. Economic growth was high for most of the 2000s, but has stagnated since 2011.

The country has large natural resources, including huge freshwater reserves and energy potential, large areas and a large and employable population. This has given rise to a diversified economy with extensive mining, well-developed agriculture, modern industry and a world-class service sector. The main export products are iron ore, crude oil, soy, sugar, meat and coffee. In addition to these raw materials, Brazil also exports cars and aircraft.

In the 2000s, the economic inequalities between rich and poor were reduced. The main reasons for this have been increased minimum wages and state benefit programs such as Bolsa Família.

Brazil is probably best known for samba, football and carnival. But behind these clichés there is a rise of distinctive cultural expressions, from traditional to modern, from high culture to low culture, from rural to metropolis.

Brazilian culture is a mixture of impulses from all over the world. The culture of the indigenous people is today best seen in the language and the food. A wide variety of place names (Ipanema, Maracanã and Manaus) and names of animals and plants ( jacaré – crocodile, urubu vulture and abacaxi pineapple) come from various Native American languages. Likewise, the basic food comes manioc (the root fruit also known as cassava in Norwegian) and all its varieties such as farinha, tapioca and various sauces and soups from indigenous peoples.

The African slaves came from different parts of Africa and brought different cultures to Brazil. Today, the African roots are most visible in song and music – not least the samba in all its variants – in language and cooking, in cultural expressions such as the capoeira and dance candomblé and umbanda religions, and of course in the Brazilian complexion.

Nevertheless, the dominant cultural heritage is the European one, and especially that of the colonial power Portugal. Brazil’s official language is Portuguese and the literary heritage is Portuguese and Spanish. The classical high culture, on the other hand, in the form of classical music, dance, opera and theater, is more inspired by Central Europe, not least France. Today’s popular culture such as song, music, dance and film is influenced by the United States, but also by Brazil’s Latin American neighbors.

Norway and Brazil have been trading coffee and clipfish for more than 170 years. In the 1950s, Erling Lorentzen established himself in Brazil and gradually built up the cellulose company Aracruz. Lorentzen became a door opener for several Norwegian establishments, including Norsk Hydro, Det norske Veritas, Borregaard and Årdal and Sunndal works.

Norway has pledged to support Brazil’s efforts to deforest in the Amazon by several billion. The funds will be paid if Brazil reduces its greenhouse gas emissions from deforestation in the Amazon and joins the Brazilian Amazon Fund, managed by the Brazilian development bank BNDES.

Norway imports about 400,000 tonnes of soybeans from Brazil each year. These are further processed into soybean meal at Denofa factories in Fredrikstad and enter the feed for Norwegian agriculture and fish farming.

The number of Brazilians in Norway has more than quadrupled since the year 2000, and the number of Norwegian tourists in Brazil is higher than ever.

In 2011, the Norwegian government launched a separate Brazil strategy to facilitate further cooperation.