Want to know an amazing place without having to go that far? In this post, we will show why travel to Asuncion. Come with us!

Much more than shopping in Ciudad del Este, the trip to  Paraguay  – neighbor of Brazil, Bolivia and Argentina – reserves tours that have been conquering the taste of tourists. The capital  Asuncion, for example, blends rich history with beautiful scenery, tranquil atmosphere and first-class cuisine.

In addition, Asuncion is increasingly  prepared to cater to visitors and locals alike, with a good hotel network, well-maintained parks and gardens, shopping malls, museums, libraries and numerous historic buildings. Interested in learning more about what this destination has to offer? So keep reading the post!

Did you know that Assumption was originally created as a fort in 1537? From it came the expeditions that founded, for the second time, the city of  Buenos Aires, among other important locations, such as Santa Fe and Santa Cruz de La Sierra. This is precisely why the Paraguayan capital is also known as the “ mother of cities ”.

Becoming independent of Spain in 1811, Asuncion is officially named Our Lady Saint Mary of the Assumption (Spanish Nuestra Señora Santa Maria de la Asunción) and  was once one of the most developed cities in  Latin America before the Triple Alliance War. – or Paraguay War, for Brazilians.

Today, Asuncion is the largest republic in Paraguay, with about 550,000 inhabitants. Its economy also develops well, attracting even many Brazilians seeking investment in the country.

What makes Asuncion so special

Clean, safe and welcoming : this is Asuncion. It is a fact that when we talk about Paraguay, what comes to mind for most people are the border towns like Ciudad Del Este, a true shopper’s paradise, but one that follows a very hectic and sometimes chaotic pace .

It must be stressed that what makes Asuncion so special is just the opposite. The city and its center are marked by a  more bucolic climate and colonial architecture, which proudly supports its native Guarani roots mixed with Spanish influences.

Speaking of Guarani, this is a very interesting curiosity: Paraguay is one of the only Latin countries in which  the language of the original population is considered as official. Over there, over 90% of people speak Spanish and Guarani. In fact, it is very common to walk the streets of Asuncion and hear the locals talking in both languages.

Paraguay’s roots and history are also present in Asuncion’s main sightseeing options. There are several  museums, libraries and historical buildings  responsible for providing true time travel. In addition, those who pass through the city can not be without knowing at least one of its markets or street markets, great for buying local leather crafts.

Now that you know a little more about this unique destination that is Asuncion, you may be wondering what to do there, right? Then, see the best activity options to include in your itinerary.

Calle Palma is the ideal place to start your visit in Asuncion. It is the main street of the city, where most of the commerce is concentrated. There, there are also some important places of interest, such as Casa do Turista – for those who want information, maps, souvenirs, etc. 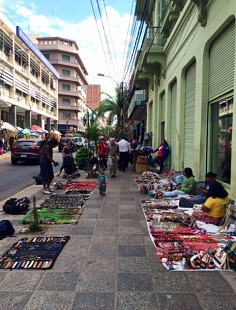 The Independence House is the only fully preserved colonial residence in Asuncion. The site houses a museum dedicated to Paraguay’s independence, displaying furniture and period objects. In addition, a free guided tour is offered, which explains some of the country’s history. 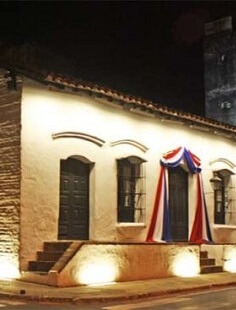 Also known as the Cabildo Museum, the Cultural Center of the Republic is one of the oldest buildings in Asunción – almost 500 years old – and was once the seat of the administrative and judicial body of the municipality. The venue today houses several permanent and temporary exhibitions, totally free. 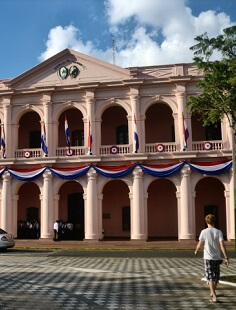 In addition to these, there are several other tours in Asuncion that are worth your visit, such as:

Best time to go to Asuncion

Like Brazil, Paraguay also has a tropical climate, making temperatures between December and March quite high. Therefore, it is interesting to travel to the destination  outside the high  summer, as thermometers at this time usually mark above 40 ℃, with even higher thermal sensations.

The middle of  winter, between May and September, is usually a pleasant time to visit the city. This is because temperatures range between 8 22 to 22 ℃. However, as the weather can be a bit unpredictable, remember to pack both warmer clothes and lighter parts.

Although Asuncion offers restaurants and eateries for all tastes and budgets, visiting the city without tasting a bit of local cuisine is not living the travel experience to the full. The  Paraguayan cuisine is very rich, formed mainly by dishes of indigenous origin.

Among the most consumed typical dishes are  chipa, salty dumpling made with flour, cheese and sprinkles,  chipa guazú, fresh corn grain soup,  bori bori, local broth that carries meat or chicken, and  sozoapua, dumpling similar to meatballs. To drink, be sure to try the  tererê, prepared with local mate and cold water. The locals favorite!

These were the best tips about Asuncion! As you can see, the city is very different from what some might imagine – it is  one of the safest capitals in Latin America , and a very quiet destination. Best of all is that it is very close to Brazil, making the trip more economical.