Despite the fact that the industry’s share of the economy has long exceeded that of agriculture, Brazil is still a distinct agricultural country. Agriculture alone accounts for 9% of GDP and employs 17% of the workforce (2000). Including agricultural products processing and production of agricultural implements, agriculture accounts for 25% of GDP and 40% of export earnings. Thus, it can be said that agriculture is Brazil’s most important economic sector. Agriculture was dominated by a single product from the colonial period, first sugar cane, later also coffee. Production is more varied today, and Brazil is one of the largest producers of a number of different growths. Besides sugar cane and coffee, soybeans, tobacco and cacao beans are the most important sales growth, while wheat, corn, rice, potatoes, beans, cassava and sorghum are the most important food crops. Agriculture has great regional variations. The most productive and well-developed agriculture is concentrated in the southern parts of the country. In the inner parts, new areas are constantly being cleared, where huge plantations are planted for mainly soybean cultivation or cattle farming. In the interior of the Northeast region there are cases of natural housekeeping. The property structure, which is among the most skewed in the world, is a major obstacle to the country’s social development. About. 2% of landowners own more than 40% of land.

Brazil is the world’s largest coffee producer with approx. 1/5 of the world production (production of coffee beans 2,002 2.5 million. Tonnes). Production may vary greatly from year to year as a result of frostbite, but has generally been declining due to agricultural policy aimed at reducing the importance of coffee. Coffee cultivation takes place especially in the highlands of the states of Minas Gerais, Espírito Santo, São Paulo and Paraná. Cultivation takes place on large plantations (fazendas) with 100,000 or more trees on each.

The cultivation of sugar cane takes place especially along the coast in the Northeast, from Natal to Salvador.

Cocoa and cotton are important export goods. The production of cocoa is among the largest (production 2002: 170,000 tons) and grown on the narrow coastal strip south of Salvador in Bahia. Cotton cultivation (production 2002: 2.2 million tonnes) takes place in a belt from Paraná over São Paulo, Mato Grosso, Goiás, Minas Gerais and Espírito Santo to Bahia.

Before 1850, Brazil was the world’s largest producer of tobacco. Today, the country is in third place after China and the United States 578,000 tons, 2000). Today’s production takes place mainly in the states of Rio Grande do Sul and Santa Catarina.

Brazil also has a significant fruit crop with the world’s largest production of oranges and the second largest production of bananas (after India). These are substantially cultivated in the coastal areas of São Paulo and Rio de Janeiro. Grain cultivation occupies 1 /3 of the cultivated area, and half produced in South region. Corn, rice and wheat are the most important cereals. Corn production is among the world’s largest (35.5 million tonnes, 2002), and is grown most for human consumption. However, following the example from the US, maize cultivation has begun in the south in combination with pig farming. Half of rice cultivation (10.5 million tonnes, 2002) takes place in Rio Grande do Sul.

Wheat (2.9 million tonnes, 2002) is mainly grown in Paraná and Rio Grande do Sul. Soybeans (42 million tonnes, 2002) are grown in Santa Catarina, Paraná, Mato Grosso, Bahia, Maranhão, Rondõnia and throughout the Central West region. The production of soy has increased significantly in recent years, making Brazil the world’s largest producer of natural (non-genetically modified) soy. In addition, inland production is being cleared of forests recently, and soy cultivation is currently considered the greatest threat to the deforestation of Amazonia (the Amazon region).

1/3 of farm income comes from livestock industry. Brazil is one of the world’s largest exporters of chicken and beef. Production in 2000 of beef was 6.5 million tonnes and of poultry 6.1 million tonnes. In terms of livestock numbers (170 million 2000), Brazil is only surpassed by India. The cattle breed is most widespread in the interior of the country; in the states of São Paulo, Minas Gerais, Goiás, Bahia, Mato Grosso and more recently in Amazônia. The industry is relatively extensively operated on large cattle farms. Dairy farming is run in the states of Minas Gerais, São Paulo and Rio de Janeiro.

Pig breeding (32 million animals, 2000) has its center of gravity in a zone within the coast from Maranhão to Rio Grande do Sul. The sheep population is relatively small, but is concentrated in the grassy steppes of the Rio Grande do Sul. In addition, considerable goat breeding is conducted, mainly in the Northeast region where the most important product is the hides. Brazil has the world’s second largest stock of horses (after China) and the world’s third largest stock of mules. 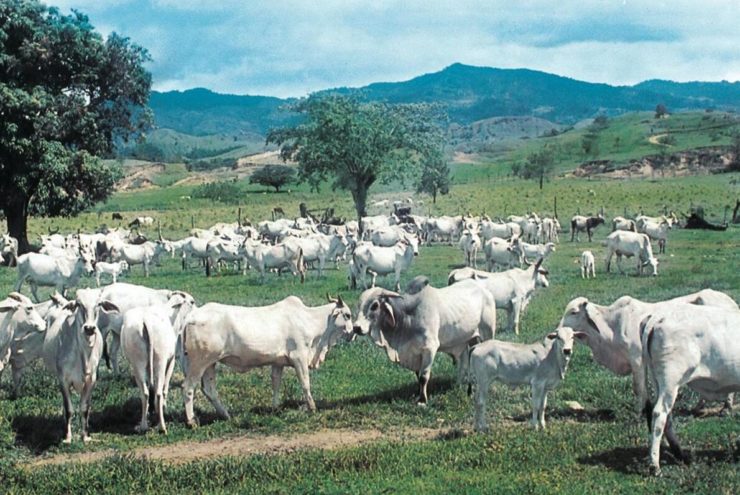 About. half of Brazil is wooded. Brazil is among the largest in the world in terms of both logging and logging. Parts of the Amazon rainforest are destroyed by large areas being burned for clearing land for cattle or mining operations. The states of Acre and Amapá have come the longest in developing an economically and ecologically sound recovery of rainforest natural resources.

In the Amazon Basin, there is the world’s largest concentration of tropical hardwood, including. many species of mahogany, rosewood, walnut and acacia. From 2000, strict restrictions were imposed on mahogany harvesting. In the southern parts of the country, timber production is based on paranáfuru. The forests also supply carnauba wax (used for electrical insulation), caroa fibers (used instead of jute), bean nuts and maté. Production of wood oil has also started. Until World War I, most of the world’s rubber came from the Amazon. Today this is reduced to less than 1% of world production. Today’s rubber production takes place mainly in the state of Acre, but also in the Amazon, Rondônia and Pará.

Despite the long coast, Brazil is not a significant fishing nation. The largest catches are in Pará, Maranhão, Santa Catarina and Rio Grande do Sul. Catching methods are generally inefficient and outdated. Main commercial products are tuna, crustaceans and shrimp. The Amazon River is rich in freshwater fish, with pirarucú and pescada as the most important purely economic ones.