Our knowledge of the history of Africa is based on a combination of analyzes of different scientific disciplines. Evidence from written sources, of both African and non-African origin, has been compared with oral traditions and archaeological, linguistic and ethnological analyzes. The nature of the material and differences in views on history have led to divergent perceptions of both specific topics and of views on the general history of Africa. Many modern African historians have, in response to the so-called colonial, Eurocentric view of history, joined the African, nationalist view of history, which is based on African conditions and societies, while non-African and especially European influence is downgraded. Others are supporters of the so-called underdevelopment school, according to which a structural dependence on Europe from the 1400’s has been decisive for the historical development of Africa, the poorer continent which consists of 54 countries according to COUNTRYAAH.

The actual history of the African continent, from which written source material has been handed down, is generally believed to have begun in the lower Nile Valley around 3000 BC, when the officials of the Egyptian pharaohs with a written language – hieroglyphs – created an administration that could organize society’s economic basis, the irrigation farm established along the Nile. Egypt’s most important contact sphere in Africa was Nubia, the land along the Nile south of the first cataract (waterfall). Settlements have been found here that do not appear significantly different from the northern ones, and from here already in 2000 imported gold. In the last half of 1000-t, Egypt withdrew the territory along the Nile to the south of the fourth cataract of its empire. The area was now called Kush, and its regent occupied a high position in the Egyptian hierarchy. From approximately 1000 BC Kush gained a more independent position with the capital Napata. The position of the Kush empire in relation to Egypt culminated with its occupation of the Egyptian throne 750-655 BC. During the Assyrian occupation of Egypt, the Cushitic dynasty withdrew to its own empire, and in 500 BC. the center of gravity shifted south to Meroë, where there are remnants of a rich culture, including possibly iron-making. 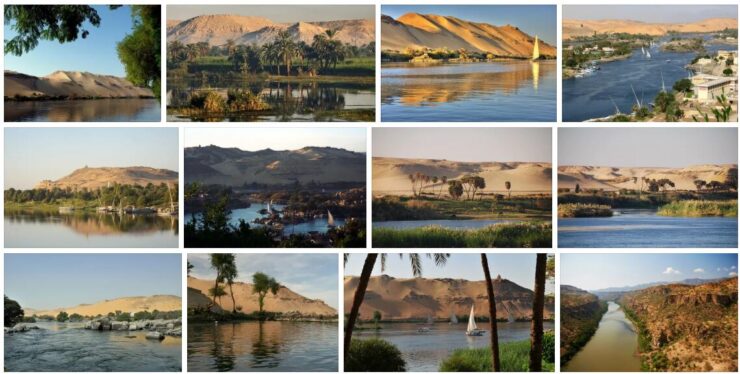 I 600-tfKr. the use of iron for weapons and tools had been introduced from Asia via the Assyrians to Egypt. The technique of the Assyrians possibly spread to the Nubians, who withdrew to the Kush area and from approximately 500 BC-300 AD had its center in Meroë. Large slag heaps have been found here, which may be the remains of an iron production, but which may also originate from other metal production. In the Tiger region of modern Ethiopia arose from approximately 500 BC a culture with elements from southern Arabia. Here was created in the 1st century AD. The Aksum kingdom with its center in the capital Aksum. This kingdom, which became Christian in the early 300’s, destroyed approximately 350 Meroë, after which Aksum became dominant in the region. Also in the rest of Africa, knowledge of iron production and new agricultural products was widespread during this period. The majority of Africa’s population was presumably farmers, organized in relatively small political entities, but Arab sources from the 700’s. shows the existence of urban communities and the large centralized Ghanaian kingdom in the savannah region south of the Sahara. The Ghanaian kingdom then had control over connections between gold mines in the south and a trading system through the Sahara, where, despite dehydration and depopulation, there were still transport routes.

Between 639 and 644, Egypt was conquered by Muslim Arabs, and approximately 705 the whole of North Africa was under their control. Partly funded by an intensified gold and slave trade from sub-Saharan Africa, the Shiite Fatimids conquered in the 900’s. first North Africa and then Egypt. In the middle of 1000-t. the initiative passed to a group of Berber nomads, the Almoravids, who from their point of departure in Western Sahara sought both south to dominate the northern trading cities of Ghana and to the north, where they conquered North Africa and Muslim Spain.

Ghana’s intensified contact with the Muslim world seems to have led the country’s rulers to approach Islam, with trade to the north gradually dominated by Muslims. In the early 1200-t. the center of gravity shifted east to the Niger River, as the kingdom of Mali from its starting point at the upper reaches of the Niger River quickly extended its power up the river to Timbuktu, from where the distance from the river system to North Africa was shortest. The rulers of the vast Mali became known beyond the borders of the Muslim world for their wealth of gold. In the last half of the 1400’s. Mali’s role in the Niger region was taken over by the Songhay Empire, under whose rulers Timbuktu developed into an important center of learning for Islam. Further east around Lake Chad, during the same period, the Kanem-Bornur Kingdom assumed a similar role in trans-Saharan trade, however, with emphasis on slave exports. The Hausa city-states of northern Nigeria also took part in this trade, but they also created, just as merchants from the Mali region had done, a trade network that stretched to the south coast.

Also in the central, eastern and southern parts of Africa, centralized states were established in several places after the year 1000. According to ABBREVIATIONFINDER, in Central Africa, it may have been created as early as the 1100’s. around Lake Kisales the beginning of the Lubariget, and further west was laid in the 1400’s. the ground to Lundariget and to Kongoriget south of the mouth of the Congo River; the kingdoms of cattle from the north in the 1300’s to 1400’s had been founded on Lake Victoria, was replaced by later migrations by the kingdoms of Bunyoro, Rwanda and Burundi.

In present-day Zimbabwe, among Shona people from approximately 1000-1400-t. a large empire centered on the royal court of Greater Zimbabwe, from which its rulers had control over the export of gold from the local gold mines to the East African coast at Sofala. In the 1400’s. created a breakaway dynasty from here, by the Portuguese called Monomotapa, an intermediary kingdom immediately south of the Zambezi River. South of the Limpopo River, the immigrant Bantu cattle farmers organized themselves both in the central parts and along the Indian Ocean.

Along the coast of East Africa arose from the 700’s or 800’s. a number of trading towns, inhabited by Swahili, a mixture of Bantu people and immigrants from the Persian Gulf. These urban communities, which were slowly being Islamized and which were closely linked to the maritime trading system of the Indian Ocean, flourished with the increasing gold trade of the Zambezi region. From the end of 1200-t. Kilwa became the leading sultanate due to its proximity to the Zambezi River.

The interior of northeastern Africa did not experience a direct Arab invasion in the 600’s, but the Aksum Empire, which lost its influence in the Red Sea, had to move the center of the empire south, from where it took up the fight against the slowly advancing Islam. After internal consolidation, the newly installed Solomon dynasty was involved in the 1300-1400-t. in protracted conflicts with Muslim sultanates at the eastern border of the kingdom.

The Muslim North Africa had from 1200-t. experienced an ever-increasing interest from the European Mediterranean countries. Venetian merchants established trade contacts with the Indian Ocean based in Egypt, while merchants from Genoa, through their trading houses in Tunis, deported gold and African slaves, brought there by the trans-Saharan trade routes, and the states of the Iberian Peninsula in the 1400’s. tried to expand in Morocco by military advance.

In the 1480’s, Portuguese ships on their exploratory voyages along the West African coast reached the mouth of the Congo River and rounded the Cape of Good Hope, and in 1498 Vasco da Gama sailed along the East African coast before heading out into the Indian Ocean. For the next 100 years, Portugal had secured an almost unchallenged monopoly on the seafarers’ contact with sub-Saharan Africa, where the main purpose of the Portuguese was a direct approach to African gold exports.

This manifested itself in the construction of trading forts on the Gold Coast in the 1480’s and a rapid Portuguese conquest of Kilwa, which in the 1530’s was followed by advance to the Monomota Empire. In addition to gold, the Portuguese were interested in a number of tropical products, including ivory; the slave trade, however, became increasingly important. The slaves were mainly exported by the Kingdom and from the 1570’s by states in the hinterland of Angola, and they were brought primarily to Portuguese sugar plantations on the islands off West Africa and to Brazil.

In the early 1600’s. The Portuguese monopoly was broken in many places by the Netherlands, England and France, who, together with the takeover of the gold and ivory trade, were particularly interested in participating in the increased export of slaves from West Africa across the Atlantic.

Different degrees of slavery in African societies and a mutual exchange of slaves have presumably existed, just as long as the export of slaves from Africa to the Mediterranean region and the Orient has taken place. Before 1500, the source material is very sparse, and although from the period 1500-1870’s it is richer, the quantitative assessments are fraught with great uncertainty. European exports from West Africa have been estimated at 10-15 million. or approximately 60% of the total exports of slaves from Africa in the period, while the remaining approximately 40% were exported to North Africa and Asia by non-Europeans. The social, economic and political consequences in Africa of slave exports vary greatly geographically and temporally.

In West Africa, the establishment of the Atlantic trading system was followed, among other things. of the formation of a number of new, strong coastal states: Oyo, Dahomey and Ashanti, while the Songhay Empire in the 1600’s. after a Moroccan invasion was replaced by a number of smaller kingdoms along the course of the Niger River. In Central Africa, slave exports led to the dissolution of the Kingdom from the late 1600’s, while Lunda expanded along trade routes to Angola. South of Africa, from 1652 onwards, the Dutch developed a colony on the Cape of Good Hope; they either expelled or subjugated the indigenous people, the Khoikhoi, and during the 1700’s. encountered the European immigrants with Bantu communities in the east.